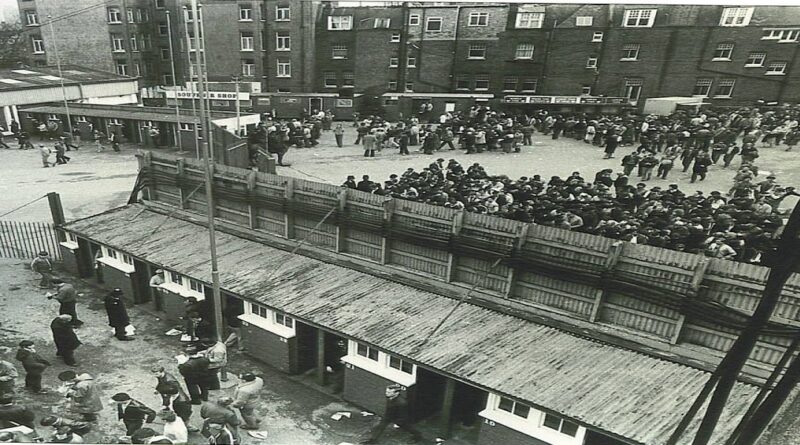 The date seemed familiar and sure enough on checking I found that 55 years ago today (16th Sept 1967), I went to my first ever Chelsea game, against Stoke City. I was ten and had never heard of Swinging London or the Kings Road which were all the rage at the time, in fact I do not think I had ever been to London. I was oblivious to all these goings on, being from archetypal suburban Camberley.

A local guy (John McKinnon, whose son Paul was in my class and later played for Sutton v Coventry) chose 2-3 Chelsea games a season, where the crowd wouldn’t be too big, to run a coach for kids from our primary school. The coach dropped its load of hyperventilating nippers and a few Blues supporting dads in Lots Road about half a mile from Stamford Bridge. For reasons unclear, I remember there was a shop on the Kings Road (opposite the old Nell Gwynne pub) selling baths which were displayed outside on the pavement. I bought the obligatory rosette and programme, which, looking back, is surprisingly informative. It also contains details of an unlikely disturbance at a recent friendly vs the British Olympic XI where a crossbar was broken in a pitch invasion (replacement cost of crossbar £49 apparently), contributing to the club’s decision to charge children full price at the turnstiles. This friendly is not even mentioned in Ron Hockings bible so can hardly be described as meaningful.

Most of the coach party went up the North Stand but for some reason (certainly not because we knew about the various terraces and stands) my friend and I, hugely excited, stood to the right of The Shed (the ‘Tea Bar’ as I later discovered) far too small and nervous to go in the densest part of the sea of bodies. The crowd seemed scarily huge to me but looking it up now, it was only 26,600, one of the lowest that season (maybe the temporary ‘full price for kids’ policy impacted here).

Very hazy memories of the occasion are limited a few highlights – getting in incredibly early; fans pushing past us to get into the most crowded part of The Shed, the number of fans in blue scarves, the cheering and scarf waving when the teams came out; our distance from the pitch; the greyhound scoreboard at the North Stand; trying to understand the songs and chants, especially the rude ones; the roar, surge and stream of toilet rolls from the middle of The Shed when Chelsea scored; the astonishing amount (to my sheltered eyes and ears) of people swearing and smoking (both much frowned upon in our house); the time it took to leave the ground; trouble trying to find the coach in the crowds afterwards. Toilet rolls were seen by the media, just starting to get into a moral panic about crowd behaviour, as the visual manifestation of rowdyism. I do remember visiting defenders Eric Skeels and Alan Bloor (those names stay with me even after all these years) were roundly booed for tough challenges. The game was not televised and the press photos of the action were non-existent so there are no permanent visual memories of the game for me to reflect on.

Admission price? I think it was 2s 6d. Floodlights on? Hot dog or Hamburger? Away fans? Songs sung? Quality of toilets? Weather? I cannot remember any of them, I am afraid. I remember being hugely excited by the whole experience and I suspect I bored the rest of my family senseless when the coach dropped me off.

In ‘Diamonds, Dynamos and Devils’ I described the game thus. ‘Although a 2-2 draw, the game was uninspiring, predictably dirty and got a One Star rating in the Daily Express. Reports talked about ‘wretched kicking and vile temper’ and ‘a bunch of wild men.’ Peter Osgood, still recovering from his broken leg, scored a clever half-volley, described as ‘a touch of artistry in a game of thuggery’ and was clattered for his troubles by Bloor and Calvin Palmer, both booked. Bobby Tambling had earlier scored a penalty.

Stoke equalised through a penalty which every match report felt was very harsh, and then passed back to Gordon Banks an impressive fifteen times in the last ten minutes to ensure a draw. Their blatant time wasting, combined with Chelsea’s lack of ‘bustle’ in attack, resulted, again, in thousands of disillusioned supporters leaving Stamford Bridge early. Chelsea were now a worrying sixteenth in the table, in sharp contrast to a season earlier when they had been top. The Sunday Mirror, under an over-excitable ‘Fans Feud At Chelsea’ headline, pointed out that there were two arrests and twelve ejections. In the event, there were three arrests and all three were banned from Stamford Bridge for a year, in addition to their court fines.’

Three weeks later manager Tommy Docherty left the club, but nine of that side were still involved when Chelsea won the FA Cup three years later.

I went to 3-4 Chelsea games a season for a few years (including a sell-out against Manchester United a couple of months later), then only a few till I left school. I did not become a regular till 1976 but 1500+ games later and heaven knows how many thousands of pounds spent, I have to admit I am probably hooked….

Top flight football has changed so much since 1967, but what will never change is the sense of wonderment and excitement felt by young children on their first visit to a Chelsea game.

This piece was written for cfcuk fanzine a decade ago and expanded with the ‘Diamonds, Dynamos and Devils’ extract. The book is available on eBay and Amazon.