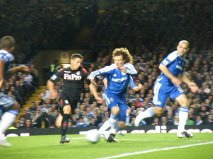 We survived injuries to Daniel Sturridge and Petr Cech, a red card issued to Alex in the 47th minute and a penalty shootout curse to advance past neighbours Fulham and reach the fourth round of the Carling Cup.

Andre Villas-Boas had said that he was going to use the Carling Cup as an opportunity to introduce the younger members of the squad to first team action, and he didn’t disappoint, deploying Oriol Romeu, Ryan Bertrand, Romelu Lukaku and Josh McEachran. Only Cech, Sturridge and David Luiz included as regular starters.

We started well, with Bertrand in particular involved.  He combined with Florent Malouda and Salomon Kalou repeatedly over the first few minutes of the game.

Elsewhere, Paulo Ferreira was doing a good job linking up with Daniel Sturridge. Romeu and McEachran looking good in the centre of midfield.

We had chances to take the lead in the first half with flashes here and there but without the finished product.

A good move came from McEachran, who raced in juggling the ball past two Fulham defenders and then sent in a left footed shot that eased past Mark Schwarzer. It wasn’t a particularly powerful shot however and Sturridge gave it a nudge into the net to make sure nobody could clear the ball. Unfortunately he was offside, and the goal was ruled out.  Daniel also hurt himself in the process and had to depart for Frank Lampard.

Sturridge wasn’t the only casualty of a first half which saw the likes of Bryan Ruiz and Karim Frei making some dangerous runs into the penalty area. Orlando Sa did the same thing on the brink of halftime and managed to clatter Petr Cech in the process.

Petr struggled on to the interval but after half time was replaced by Ross Turnbull who was immediately brought into action when Ruiz released Frei in the area and Alex launched into a sliding tackle, bringing the teenager down and earning himself a red card and Fulham a penalty. The sending off was possibly harsh, but it was certainly a foul.As it turned out we didn’t need to worry about it. Pajtim Kasami stepped up and cracked his shot against the top of the crossbar.

The match remained 0-0 but of course we now had to play with ten men. That required a switch, and McEachran was substituted in favour of John Terry to shore up the defence.

The way we reacted was impressive, because despite the numerical disadvantage we were by far the better side in the second half with Lukaku really looking like something of a force to be reckoned with.

Again we created chances with Schwarzer having to pull off several brilliant saves to deny a bevy of Chelsea players. Then it was Fulham who looked suddenly more likely to stop the game going to extra time with Ross Turnbull making some excellent stops.

With neither team able to force the issue, we went to extra time. This was notable only for how tired everyone looked. Lukaku succumbed to cramp in the early stages, and a couple of Fulham players also collapsed on the pitch mid-play. There was the odd chance here and there but neither side could score and so to the inevitable spot kicks.

Lampard was the first to take, but his penalty was saved by Schwarzer. Zamora replied with a well-taken goal, and then David Luiz and Steve Sidwell (!) exchanged beautifully-taken spot kicks into the bottom right corner. Chelsea’s next spot kick taker was John Terry who stuck the ball well and truly into the back of the net. Moussa Dembele did not, sending a weak spot kick into Turnbull’s midriff, and when Kalou and Malouda both converted brilliant penalties, it fell to Bryan Ruiz to keep Fulham in the cup.

Nobody’s sure whether the ball crossed the line (I don’t think it did, but obviously, I’m biased) and so thankfully we were through as goodness knows how unlucky we’ve been in penalty shootouts over the past years.

It wasn’t a game full of quality, but it was really interesting, especially the way we played while down a man. We also got to see the youngsters performing and that looks to bode well for the future.

Next up back to the Premier League – home to Swansea on Saturday.