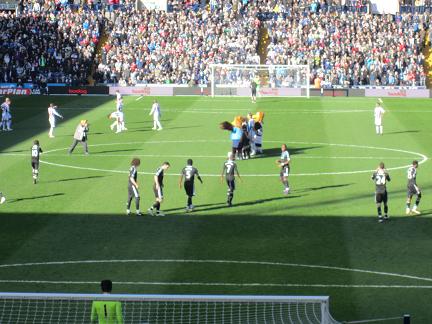 A late strike from Gareth McAuley led to another Chelsea defeat piling yet more pressure on Manager AndreVillas-Boas.

Both sides named unchanged teams from their respective wins last weekend as Fernando Torres missed out once again while Daniel Sturridge started despite being a doubt with a toe injury.

The match began brightly for both sides as first Keith Andrews’ header almost tested Petr Cech, and then moments later at the other end Gary Cahill tried to bundle the ball home after Juan Mata’s corner.

West Brom weren’t allowing us any freedom in possession as they pressed with intent, and after robbing Ramires of the ball in the centre circle the Baggies carved open another chance as James Morrison’s long-range effort was tipped over the bar by Cech.

Michael Essien played a forward ball to Didier Drogba who in turn flicked cleverly into the penalty area, but Mata’s attempt was turned behind by Ben Foster.

Next to try his luck was Fortune as his effort squirmed wide of Cech’s right-hand post, followed soon by a long-range strike from Odemwingie, which also went wide.

Although we were offering more in attack West Brom gave as good as they got. Thomas looked particularly lively down the left-wing, beating Ramires time and time again, while Andrews went close with a header.

The backwards and forwards nature of the match continued as twice we were unlucky not to take the lead. Essien’s strike was clawed away from the top corner by Foster, and then Sturridge beat Ben Foster but put his strike wide of the post. Despite a late effort from Youssouf Mulumbu, the first-half ended goalless.

The second period started in a similar way as both sides traded blows, with neither team managing a goal.

Referee Mark Halsey received a massive cheer as he overturned his linesman’s decision to give us a free-kick, handing West Brom a set-piece from which they almost scored, but Odemwingie was crowded out by our backline.

We then went straight down the other end and almost took the lead ourselves. Steven Reid gave possession away before going down injured. Drogba played Sturridge through the middle, only for Foster to run out of his goal by some distance – clearing the ball.

Fortune soon got himself another opportunity as a ball from the left evaded Luiz, bouncing over him but the Baggies striker’s shot was palmed over by Cech.

By now the match was fast and furious, with both goalkeepers regularly called into action.

Fortune was at the fore once again as he tested Cech from the edge of the box, then moments later Ashley Cole cleared his lines just before Morrison could head home for the Baggies.

A goal always looked likely as finally West Brom took the lead through McAuley. We once again failed to clear our lines from a free-kick and after the ball bobbled about in the penalty area, the former Ipswich defender was on hand to poke home past Cech.

Frank Lampard came inches from equalising as he flicked Mata’s pass goal wards, but West Brom held on for the three points.

Roberto Di Matteo will take charge of the team for our next fixture on Tuesday night away to Birmingham in the FA cup replay.