We reignited our challenge for a top four place by winning 4-2 at Aston Villa despite a late comeback from the home side.

It was an emotional day following the news regarding Captain Stilyan Petrov, who attended the game after his leukaemia diagnosis.

Didier Drogba was missing for us with a toe injury, so Torres led the line, whilst Ivanovic returned to the team.

Aston Villa’s inexperience showed immediately as they fell behind after just nine minutes.

Salomon Kalou and Torres combined to feed Mata through on goal as Given came out of his area and Steven Warnock pulled off a block as Torres seemed set to score, but Sturridge pounced to slam the ball home.

On the 19th minute, Villa Park and Chelsea fans stood to support the club captain Petrov, with a minute’s applause and it almost culminated in an equaliser as Collins nodded a corner just over the bar.

Mata then linked well with Kalou as his lifted finish beat Given but struck the post and the rebound from Torres was blocked by Nathan Baker.

As half-time approached, Villa had their best chance as Barry Bannan controlled Weimann’s cross on the right side of the area. His lay-off to Agbonlahor gave him the space to strike low at goal but Petr Cech saved fantastically with his legs. 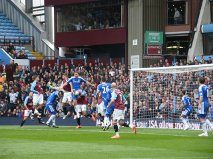 Seconds before the interval, Gary Cahill replaced Luiz who appeared to have picked up a minor knock.

We doubled our lead just after the break as Mata’s corner landed at Ivanovic’s feet and he shot past Given. Florent Malouda then came on for Mata as we appeared to be comfortably in control of the game.

But there was to be a twist as Collins met a long throw to plant his header past Cech and give Villa a goal and there was a game on once again.

Villa were clearly encouraged by this and began to push for an equaliser.

Mark Albrighton collected the ball and his low cross travelled between Cech and our defenders with Lichaj arriving to poke home Villa’s second.

But our Chelsea side showed a great response as from another corner Ivanovic headed home his second of the game.

Villa pressed for another late surprise but, this time our defence held firm.

Daniel Sturridge then led a last minute counter-attack with an assist for Torres as he controlled the pass and smashed low past Given to put the game beyond doubt and send the Chelsea travelling support wild with delight.