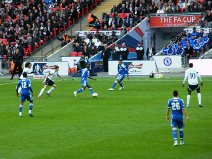 We are through to the FA Cup final defeating Tottenham 5-1 in a game which will be remembered less for the overwhelming victory and more for a controversial “ghost goal” from Juan Mata.

The game started tentatively and slowly with Drogba creating an early chance peeling away from his marker chasing a long ball, but mistiming his volley in the box.

There was a nervy moment for Spurs in the 26th minute when we broke forward, Salomon Kalou picked up the ball from Kyle Walker splitting the Tottenham defence but Juan Mata was outpaced by the pass and Cudicini collected safely.

Kalou was again involved shortly after when he delivered a drifting cross from the left. Drogba rose to meet it but Ledley King intervened to divert it out.

Spurs nearly took the lead on 36 minutes when Lennon received the ball near the right-hand post with Van der Vaart advancing from the penalty spot. His header past Petr Cech but thankfully John Terry was on the line to keep it out with his knee.

Adebayor then got a similar touch with his knee when he lunged to meet a cross from Van der Vaart, but as it was his effort came off the post.

Spurs’ failure to capitalise was punished when Drogba out of nothing received the ball with his back to goal. He seemed to be heading away when instead he swivelled around Gallas and hammered it left footed past Cudicini.

After the break we pushed for a second when an almighty scramble in the box saw players pile up along the line and Mata get a shot into the melee. From some distance away, referee Atkinson ruled that it crossed the line. Television replays appeared inconclusive but whilst Spurs protested the controversial goal stood.

Tottenham got back into it within five minutes. Adebayor through the centre with Cech rushing forward to meet him. He brought Adebayor down clearly but was spared a red card as Bale was on hand to knock it into the net on the advantage. In the meantime Luiz, hurt tussling with Adebayor in the build-up, was replaced by Cahill.

After that explosion of events a brief lull came although Spurs Ledley King had a header from a Van der Vaart corner, but it was just diverted wide.

Ramires then made it 3-1 in the 77th minute as Walker’s deep position allowed Mata to dink the ball forward picking him out perfectly, and the Brazilian buried it.

A place in the final was confirmed soon after as desperate far-fetched penalty shout for a Cahill handball was followed by a free kick at the other end.

Frank Lampard stepped up to fire it into the corner from long range in keeping with his all-time best.

Tempers then flared in stoppage time with Scott Parker needing restraining by Spurs teammates in reaction to a John Obi Mikel kick but substitute Malouda confirmed the rout by finishing between Cudicini’s legs on the end of a lovely assist by Juan Mata.

The blue end of Wembley stadium was in rapture. The other end was almost entirely red seats.

We will now play Liverpool in the final on the 5th May.

Speaking With The Enemy – Tottenham