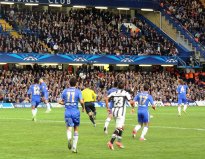 We began our Champions League defence with 2 stunning goals from Oscar but disappointingly surrendered the lead to draw 2-2 against Serie A Juventus.

Roberto Di Matteo made only a slight tweak to the team that drew at QPR, replacing Ryan Bertrand with Oscar.

Both sides struggled to create opportunities in the early part of the game although Juventus began to threaten on the counter-attack and twice came close to breaking the deadlock midway through the first period.

Firstly, Marchisio broke from midfield to spring our off-side trap and latch on to a long pass from Barzagli but his first touch was too heavy and Petr Cech was able to smother the danger.

Soon afterwards a Branislav Ivanovic pass was intercepted and Mirko Vucinic was sent through on goal but then shot wide.

Half an hour in and Oscar made his mark and demonstrated why he had been preferred to Juan Mata in the central playmaker role behind Fernando Torres.

Eden Hazard was once again the creator swerving in from the left and teeing up Oscar who took a touch and then let fly from 25 yards, although Buffon might have saved the shot had it not taken a deflection off Bonucci.

There might have been an element of fortune to Oscar’s first goal but the second was an absolute gem!

With a single touch he was able to control the pass he received on the edge of the box and, at the same time, wrong-foot the defence to give himself a goal-shooting opportunity. The second touch was as glorious as the first, a delightful curled shot evading the dive of Buffon.

Unfortunately we switched off in the 38th minute and were punished by Arturo Vidal. The midfielder lashed a low shot beyond Cech from 20 yards to give his team hope going into the break.

Juventas are famed for combining their physical determination with a willingness to attack and proved in the second period why they have become such tough nuts to crack.

Sensing the visitors were beginning to take control of proceedings, Di Matteo made his first substitution of the night, replacing Ramires with Ryan Bertrand, a switch which saw Hazard move out to the right-hand side and Bertrand play ahead of Ashley Cole on the left.

Soon after it was Oscar making way after suffering being caught by a late tackle minutes earlier, with Mata coming on to play in behind Torres.

Shortly after Quagliarella took full advantage when Mikel gave the ball away deep in his own half. John Terry tried to deal with a deep pass from Marchiso by attempting to catch out Quagliarella but the Italian darted past him and slotted past Cech for the equaliser.

It could have been even worse as with four minutes left, Quagliarella clipped the top of the bar following a turn and shot.

After the match Roberto Di Matteo summed up by saying:-

‘It was a great debut for Oscar. ‘It was the right moment for him to start the game, we needed a bit of time to work with him and he was perfect tonight with the tactical information we gave him. The second goal was a wonderful goal and it is great to see we have a player like that in our ranks.

‘Of course we feel disappointed and a little bit deflated that we found ourselves in a fantastic position to win this game and we came away only with a draw,’

‘It was a good game of football and we played against a good team and they are always dangerous. They have a lot of quality but we feel disappointed because we should have closed the game’

Next up a return to the Premiership with a home game vs. Stoke on Saturday