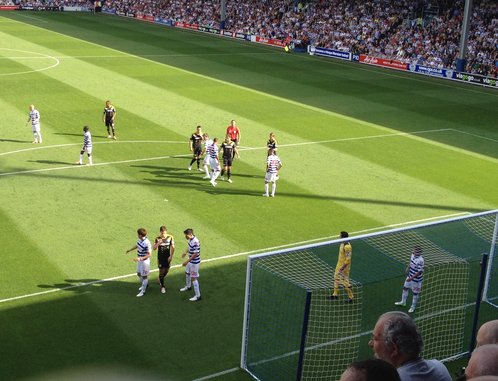 We maintained our unbeaten start to the season but failed to score in a feisty London Derby against QPR at Loftus Road.

The pre-match hype surrounded Rio Ferdinand, John Terry and Ashley Cole and as speculated Ferdinand refused to acknowledge either player in the handshakes prior to kick-off.

Eden Hazard once again proved the focal point of our fluid play through the mid-field as he had the first chance of the game only to be thwarted by Cesar in the QPR goal, who also stood tall to prevent Fernando Torres 10 minutes later.

Hazard was unfortunate not to win a penalty after half an hour of play going down under pressure from Shaun Wright-Phillips in the box, but referee Andre Marriner waved away any suggestion of a spot-kick as he had also done with Terry’s earlier appeal when he appeared to be wrestled to the ground by Ryan Nelsen.

QPR caught us a couple of times on the break to put our defence under pressure with Bobby Zamora managing to test Petr Cech.

A quickly taken Frank Lampard free-kick caused the Rangers defence to be on the back foot for a brief period and Mikel’s sweetly-struck shot looked goal bound before a hooped shirt got in the way.

In the opening stages of the second half it was QPR who looked most likely to score.

Mackie’s introduction as a substitute gave QPR some attacking bite in the final third and it was a John Obi Mikel error that nearly led to the deadlock being broken.

His loose back-pass inadvertently played Zamora through on goal, however he was unable to find the angle after rounding Cech, allowing John Terry the time to get back and clear the shot.

Roberto Di Matteo handed cameo appearances to Victor Moses and Daniel Sturridge and the former Wigan man looked lively teeing up Hazard with a gilt-edged opportunity which he blazed over the bar.

With very little opportunity late on in the game both sides were forced to settle for a point.

After the game Di Matteo said.

‘Playing at Loftus Road is always difficult because of the history and the rivalry of the clubs. We controlled the game very well, we created a number of chances and it was just the goal that was missing. One goal would have probably been enough for us to win the game.

‘I am not concerned because we created chances. It is the first game we haven’t scored, we normally do, and we will continue to do so if we create chances.’

Next up on Wednesday is a Champions League game at Stamford Bridge vs. Juventus