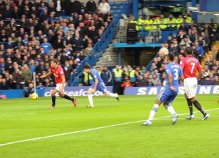 Our premiership lead was reduced to a point as we suffered our first league defeat of the season in a match which was full of controversy.

John Terry was serving his second match of a four-game suspension so Roberto Di Matteo started with the same XI that had won so well at Tottenham the previous weekend.

It was Manchester United who started the stronger as after just four minutes Rooney received the ball out wide. His cut-back was whacked right footed against the post by van Persie but the rebound struck Luiz and bounced past Petr Cech for an own goal.

Eight minutes later and Manchester United doubled their lead with Van Persie.  Antonio Valencia spotted him unmarked in the box and the former Arsenal man slotted in his sixth goal at Stamford Bridge.

We were finding it hard to break the visitors down but raised our game leading up to the break forcing three saves from David de Gea before Mata made Rooney pay for hauling down Eden Hazard outside the box with a beautiful curling free-kick into the back of the net.

We came out with determination at the start of the second half as after 53 minutes United failed to clear following more excellent play from Mata and Ramires rose above Cleverley to head in Oscar’s by-line cross for the equaliser.

No doubt that Chelsea were then looking the stronger and more likely to go on and win the match but it all fell apart after that point.

Firstly Ivanovic received a red card for a professional foul on Young clipping the winger as he raced through on goal.

Fernando Torres was to follow down the tunnel five minutes later receiving a second yellow for simulation even though replays clearly showed there was contact from Jonny Evans.

Down to nine men we struggled to contain United; the final straw coming by way of a Hernandez goal which was offside when he tapped in the winner.

Next we face Manchester United again this coming Wednesday in the Capital One Cup at Stamford Bridge.