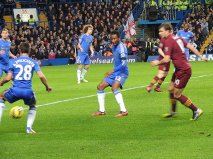 Rafael Benitez’s first game at Stamford Bridge against Manchester City as the new Chelsea manager ended in a goalless draw.

Benitez faced genuine and sustained opposition from Chelsea supporters as they made clear their anger at the former Liverpool manager succeeding the popular Roberto Di Matteo.

There was only one change from the midweek game vs. Juventus with Fernando Torres restored to the starting line-up in place of Gary Cahill, who dropped to the bench.

In the early exchanges our key attackers lacked accuracy with their passing as the game settled into a rather flat pattern although Manchester City’s Sergio Aguero and David Silva wasted headed opportunities to put their team ahead.

Both defences continued to be on top in the second half but we barely created a genuine opportunity until 60 minutes when Torres had the best chance.

In terms of opportunities created there was little else to report in a rather lacklustre performance  although another positive point was a first clean sheet in 11 games.

The draw leaves Chelsea five points adrift of leaders Manchester United while City finish the weekend in second place after failing to make their domination of the play and scoring opportunities count.

Next fixture for the Blues is Wednesday at Stamford Bridge vs. Fulham.