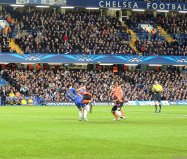 Somehow we always seem to find a way in the Champions League and Moses was the hero as he headed in against Shakhtar Donetsk to leave us joint-top of Group E.

Shakhtar playmaker Willian twice equalised for the visitors to cancel out Fernando Torres’ sixth-minute goal and a wonderful 45-yard strike from Oscar.

But Moses had the final say with a goal that leaves us alongside Shakhtar on seven points, a step closer to qualification with two games to play – at home to Nordsjaelland and away to Juventus.

Shakhtar named the same side who won the reverse fixture 2-1 in October and the game burst into life from virtually the first kick.

The early gift from Shakhtar goalkeeper Andriy Pyatov gave us an early lead as he received a routine backpass from Yaroslav Rakytiskyy with Torres reading the clearance and sticking out a leg for the ball to ricochet straight into the net.

Three minutes later the Ukrainian visitors were level as Fernandinho burst past Chelsea defenders into the right side of the penalty area and cut the ball back for Willian to slot through a crowd of bodies with Petr Cech diving the wrong way.

The game then settled down, both sides creating chances and with Torres finding the side netting from a tight angle before Alex Teixeira zipped an effort just wide of the post.

Five minutes before the break we once again took the lead thanks to a wonderful strike from Oscar and another woeful clearance by Pyatov. The keeper rushed off his line to clear Mata’s through-ball with his head. Oscar made it look effortless controlling the ball with his chest before pinging his finish into an empty net from 45 yards.

The fluid, end-to-end pattern continued after the break and Willian again levelled the score in the 47th minute as he side-footed Dario Srna’s cross with his left foot to finish a wonderful Shakhtar move.

At the other end we had a huge shout for a penalty when Ramires appeared to be brought down in the area by Srna only for referee Carlos Velasco Carballo to wave away the appeals to Chelsea players and fans astonishment.

Then, with the last touch of added time Moses rose in the box to head home Mata’s corner to send Stamford Bridge into delirium.

Next up a return to Premier League action against Liverpool at home on Sunday.