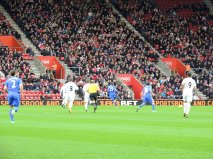 We came from a goal down against Southampton to progress to the fourth round of this year’s FA Cup competition.

New signing Demba Ba made his first start in one of five changes from the defeat to QPR  with Ashley Cole, Eden Hazard, Juan Mata and Ramires all returning to the starting line-up.

After a subdued opening 20 minutes it was the home side who opened the scoring. Jack Cork’s pass fell to Jason Puncheon who found Rodriguez with a through ball and he finished calmly past Ross Turnbull.

It was not long before we were level. Moses’ back-heel sliced open Saints’ defence before Mata lifted the ball over Artur Boruc. The ball was already on its way into the goal but Ba was determined and pipped Steven Davis just to make certain.

We doubled our lead on the stroke of half-time as Ashley Cole found Moses in a crowded penalty box to slot past Boruc.

Pushing on after the break Mata at the heart of the midfield worked himself some space on the left before crossing for Ivanovic to head home.

A fourth soon followed and it was Ba who doubled his tally. Ramires started the move by finding Hazard who spotted the former Newcastle striker’s dart into the area to help him beat Boruc with ease.

A fantastic double save by Ross Turnbull denied Saints from pulling a goal back, first blocking Steve De Ridder’ goal-bound strike before he got up quickly to parry a Davis effort. Then, down the other end, only the feet of hosts’ keeper Boruc stopped Ba from heading in for a debut hat-trick.

There was time for one more Chelsea goal late on as Frank Lampard came off the bench to win and convert a penalty to bag our fifth. 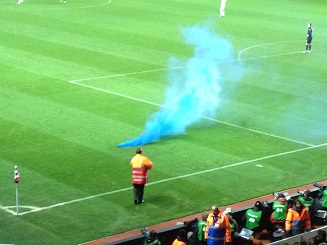 As he celebrated in front of our fans packed into the away end behind the goal, Lampard, could be seen mouthing the words ‘I love you’ which he explained after the game.

‘They’ve supported me throughout my career here, particularly in recent weeks,’ he acknowledged.

‘The way they were with me today was the way they’ve been with me all the time and I just wanted to say thanks.

‘That’s our platform out on the pitch to say thanks, firstly by doing the business. They pay their money to come and watch, so it was nice to say it back to them.

‘That’s genuinely how I feel; this club’s been amazing to me, and the club is the fans, so I can only thank them.

Our next FA Cup fixture will be an away tie to either Southend or Brentford.