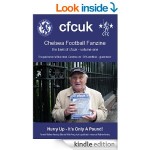 cfcuk, renowned as the “peoples” publication, has been on the streets since May 1999 when it was originally launched as Matthew Harding’s Blue and White Army. Chelsea Football Fanzine, ‘the best of cfcuk” Volume One, takes a look back at the first 5o issues showcasing a fascinating selection of articles, interviews and editorial material featured between May 1999 and September 2005, From ‘fighting’ Ken Bates to ‘loving’ Mr Abramovich, Chelsea Football Fanzine reflects the changing views and opinions of supporters who followed the Blues during one of the most turbulent and ultimately glorious periods in the Clubs history.

“It’s totally amazing to me that a group of illiterates, who know very little about football and even less about writing, can plod along through 100 issues and still keep going. It just goes to show you what a gang of tattooed misfits can do if they put their minds to it.” – BRUCE BUCK- CHELSEA CHAIRMAN

Available to download FREE for a limited period here