There seemed to be some hope and expectation (on my part at least) that the international break might be just the distraction our team needed to reinvigorate our start to the season. Sadly this wasn’t be be. With Courtois needing knee surgery following a training ground injury, Begovic was called in to cover, with Falcao, Kenedy, Willian and RLC among those on the bench. Kurt Zouma got the nod ahead of Gary Cahill to play alongside JT, with Mikel also given a start. Apart from that, the usual suspects lined up.

An even enough start, both teams looking to lay down a marker for the game, Pedro looking particularly lively for us and looking the most likely to make something happen. But it was Everton who opened the scoring after 17 minutes, the snidey Naismith, on as an early substitute, heading past Begovic, with our defence just looking on as spectators. And 5 minutes later Everton’s, and Naismith’s, score had doubled but not before Begovic had pulled off some fantastic game saving stops. It was all looking a bit too easy for the home team.

But our fans were resolute and in good voice urging our boys on, still plenty of time to get back into the game. And with 10 minutes left of the first half, Matic collected the ball well outside the box and let one fly into the top left corner, eagerly tracked all the way by the away fans looking on from behind our man in the middle of the pitch. That goal certainly livened up the team but the end of the half came too soon and we couldn’t capitalise on our best spell of the game. HT 2-1.

With everything to play for second half an early change saw Mikel replaced by the young lad Kenedy. An attempt on goal by Chelsea reject and all round lazy git Lukaku found the loose ball held up by JT, a slight touch not given as a back pass by the ref, much to the consternation of the baying crowd. Yet another reason to add to the long list of reasons to boo our captain!

But as we seemed to lose our late first half momentum the home team were regaining theirs, Begovic having a lot of important saves to make. To freshen things up a bit and push things forward Pedro was replaced by Falcao with 20 minutes left to play and 4 minutes later Willian came on for Fabregas.

But we weren’t able to make inroads, too many needless and wayward passes and poor positioning off the ball meant we were chasing our tails for much of the game and, more telling, getting caught at the back. And yet again, with just a few minutes left of the game, the killer blow came when Naismith scored his hat trick goal by just wandering behind our defensive line. Now left with too much to do the game ended 3-1. 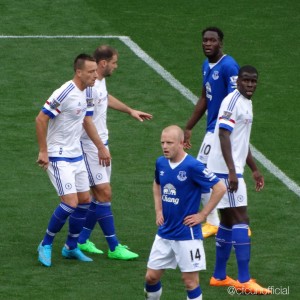 A dejected looking JT, along with a few others, managed to acknowledge the travelling support, and while many fans had already left the ground, hopefully a rendition of We Love You Chelsea was heard by the team as we demonstrated our unconditional support.

Win or lose, up the Blues!

Home Draw in the FA Cup Third Round