After another momentous few days following a rallying cry from Jose and JT at their press conference earlier in the week and the media continuing their feeding frenzy, it was back to matters on the pitch in the next group game of our Champions League campaign

A strong starting lineup, Begovic ever present in goal, but a change in the back four, Zouma and JT paired at centre back, with Azpilicueta moved across to the right and Baba Rahman taking up the left back position. In defensive midfield Ramires and Matic, ahead of them Willian, Fabregas and Oscar, with Diego Costa up front. On the bench Blackman, Cahill, Loftus-Cheek, Kenedy, Remy, a welcome return for Pedro, and in the evening’s surprise, but understandable given his last outing, Eden Hazard is also benched.

To the resounding voices of support for our manager ringing around the ground from the start of the game, a big performance was expected and the lively start showed some fighting spirit, even if the quality of passing didn’t quite show at times. And while we were able to test their keeper a few times, our defence, while not always pretty, were more than a match for any Kiev danger. Its patient stuff, with limited chances to create a real threat on goal, but in a can’t-lose game we couldn’t afford to get caught on the counter attack. But if we weren’t making inroads ourselves, we were keeping Kiev danger man Yarmolenko pretty quiet, Baba Rahman looking after him well. 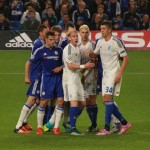 Much to the relief of the increasingly nervous home crowd the breakthrough came just after the half hour when Willian whipped in a decent cross in front of goal, only for the ball to be athletically intercepted by the head of Dragovic for an own goal. Just the boost we needed and a cue for renewed support for our Special One.

Fired up, that lead certainly gave us confidence although towards the end of the half the Ukrainian visitors were pushing to find that equaliser, but as we went into stoppage time Matic managed to nick the ball and feed it through to the goal bound Costa, accompanied by two Kiev defenders, only to be brought down in the box. As screams went up for a penalty, a quick text and the TV ref at home reckoned he may have gone over a bit too easily. HT 1-0.

A competitive start to the second half, both sides looking for that all important goal and both had some decent chances. But while our boys needed to be on their toes to prevent the equaliser we had some decent chances ourselves, big Kurt Zouma getting involved, a superb last ditch sliding tackle at one end and a golden chance to put us in the lead at the other end. 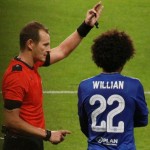 Into the last 15 minutes of the game and a Kiev corner had Begovic wandering off his line into no man’s land, and while rushing back, Dragovic had fired into the back of the net and past the covering JT for the frustrating equaliser. Cue an immediate double substitution, Fabregas and Oscar being replaced by Hazard and Pedro.

In for a nervous last few minutes of the game, but with the fans willing on the team and our boys stepping up a gear, it was Eden Hazard with one of his jinking runs that was rudely halted by the Kiev defender. With a perfectly positioned free kick a few yards outside the box, it was who else but Willian lining up the ball with his steely gaze eyeing up just one target.

And what a free kick, up and over the wall and curling into the top near corner. If ever a goal was needed to galvanise the team, the manager and the fans. Just brilliant! Suddenly Hazard was playing like a man possessed, and the whole team seemed to respond.

But if Willian’s free kick was the stand out moment on the pitch, off the pitch in the dying minutes of the game the whole home support stood up for The Special One and to a man, woman and child sung his name in a defiant show of unswerving support for our best ever manager. A huge emotional moment at the Bridge.

Back to the game where Man of the Match Willian received a standing ovation as he was replaced by Gary Cahill in stoppage time. And with that the final whistle, a massive result for us which sees us in second place in Group G with our next game a trip to Maccabi Tel Aviv later this month.

But more than that it sent a resounding message to those seeking to destabilise our club that we are standing together in support of our team and our manager, whatever happens.

When Common Sense Is Becoming Quite Rare