This match report is bought to us by 11 year old Jack.

Jack, like his school mates, suffers from autism but goes to see his beloved Chelsea whenever he can, his teacher, Gill Reeves (our regular match reporter and committee member) does a sterling job with these youngsters and we thank her for the time and attention she gives to these children.

Under 21’s vs. Norwich – Match report from Jack 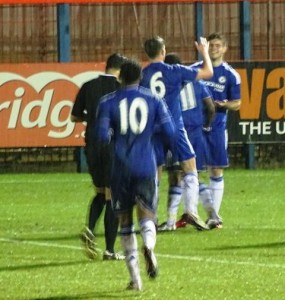 My name is Jack and this is about the Under 21’s game which we went with Teacher Gill and this was at Aldershot Football Ground.

Under 21’s was playing against Norwich and when we got there early we saw Jordan and Tammy and we saw Adi who is the Manager and we said “Good Luck for the game” Jordan was going to be the Captain for Chelsea and we saw Dion as well. They said thank you for coming to the game to cheer for us.

It was VERY VERY cold and I had on my big coat and my Chelsea gloves and Chelsea scarf. We waved our Kent Blues flag and all the Chelsea players waved to us.

When the game started Chelsea was very fast and Teacher Gill said this was good news to look like we would get a goal. Teacher Gill was right because it was Chelsea and player Reece Mitchell and then Jordan who got a goal so it was 2. I wanted Tammy to score a goal very much and he tried and he tried. When it was half time we went and got some hot chocolate and some soup to keep us warm and Teacher Gill said I bet we get more goals in the second half and she was right because very soon Chelsea had 3 goals and this time it was Kasey.

Next thing that happened was Dion came on and we all cheered as he is really good Chelsea player. Then it was exciting because Dion ran and ran right with the ball and we all shouted “shoot!!!!!!” and Dion did and he scored another goal with was 4 to Chelsea and 0 to Norwich.

Then right at the end there was another goal for Chelsea and it was Tomori so that was 5 different players who got goals but I was a bit sad for Tammy because I wanted him to get a goal as well.

Teacher Gill said the next Chelsea game is at Stamford Bridge and I am really excited because we might be able to go.

Hull Away In Round 4 Of The FA Cup – Date Arranged