I was looking forward to my visit to Paris, my first European trip since last year in Paris. Call me a glutton for punishment, but I enjoyed the time spent with friends and fellow Chelsea fans, a great opportunity to socialise over a few drinks and also get to eat some rather nice food in a fabulous city.

But we were there, first and foremost, for a game of football and in goal was Courtois, with our reshuffled back line of Azpilicueta, captain Ivanovic, Cahill and Baba Rahman. In front of those were a rested Mikel and Fabregas, with Hazard, Willian and Pedro supporting Costa up front. Matic was suspended for this game. On the bench were Begovic, new boy Matt Miazga, Kenedy, Loftus-Cheek, Oscar, Traore and Remy.

Always very tiresome when the opposition fans boo every time we were on the ball and, for that matter, every time the Chelsea fans sung in support of our team. But hey, we get used to these things, no one likes us and I can’t imagine why!

But fair to say that we saw little of the ball in the opening minutes of the game but while PSG seemed to be demonstrating more quality on the ball we defended resolutely and gradually worked our way back into the game.

After around 20 minutes we started to retain more of the ball and moved it well around the final third, picking our moments to venture into the box. Accompanied by the inevitable booing from the hostile home crowd the ball eventually fell to Baba Rahman who crossed a lovely ball over to the lurking Costa who made himself enough space to head the ball towards goal just outside the six yard box. It took a good save from Trapp to prevent the goal, totally against the run of play of course. Sadly, the resulting corner from Willian went straight into the hands of their keeper.

That chance was just the boost we needed to get ourselves going and we certainly started to grow in confidence and as a consequence the game became much more enjoyable as a contest. On 30 minutes a succession of free kicks just outside the box signalled that we were back in contention as more chances were being created, a chance by Ivanovic straight into the side netting.

Super game now, but even the much feted Ibrahimovic was prevented from scoring when his headed chance was thwarted by the defensive presence of Gary Cahill. And it was end to end stuff as both teams looked to find an all important opening goal.

But as we approached 40 minutes Mikel was booked for fouling Lucas Moura as he approached the area with the ball, which resulted in a free kick on the edge of the box. And who else but Ibrahimovic to take the free kick, and as his shot took a deflection off Mikel at the edge of the wall, the ball was in the back of the net, Courtois unable to track the redirection of the ball.

But as the French fans celebrated their good fortune we continued to play positively and were soon rewarded with a free kick on the edge of the box as Hazard and Willian moved the ball up the pitch. The free kick was followed by a corner and neither came to anything, but we kept possession well and maintained the pressure on their goal. 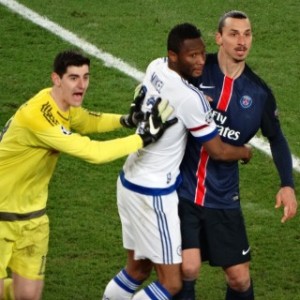 Into stoppage time and another Willian corner, this time finding the head of Costa at the near post before the ball dropped in front of Mikel, who gratefully blasted it into the back of the net. Pandemonium in the Chelsea corner of the ground as we celebrated a rare Mikel goal, and I was a bit disappointed the team didn’t run in the direction of the away fans to celebrate, perhaps discouraged from inciting the travelling contingent already under close scrutiny? But one day we will probably look back in one of those ‘where we you when Mikel scored in Paris’ moments and hopefully one of our talented Chelsea lyricists will come up with an appropriate song in recognition. And while we were still happily celebrating we hadn’t noticed that the teams had left the pitch for half time, all square at 1-1.

Second half and great chance to take the lead when Hazard played a through ball to Costa, but whose chance to strike was snuffed out by the approaching keeper. And at the other end Di Maria, seemingly having a much better time of it in Paris than in Manchester, had his long range shot tipped over the bar by Courtois. Blistering start to the second half and the game could have gone either way.

But as the half wore on PSG were creating the more likely chances and although our defence had them covered it was certainly backs to the wall for a good while and Courtois was called upon to keep us in the game a number of times. Some nail biting stuff for us.

Twenty minutes left on the clock and our only substitution, Oscar replacing Hazard who was not as influential on the game as he could have been. We started to have much more of the ball and to more pathetic boos and whistles from the home crowd. And it was a beautiful long ball from Fabregas to Oscar that nearly nicked a goal for us, but Oscar couldn’t quite connect before the keeper got to the ball.

But in this end to end game the initiative was back with PSG, and a perfectly timed run on goal by Cavani to collect a pass found him one on one with Courtois and as our keeper closed him down, Cavani slipped the ball under his legs and scored from a pretty tight angle. Have to concede that was a good goal, and I’m not sure Courtois can be blamed for trying to close down the angle.

Still more defending for us to do as the momentum remained with the home side. But as the game approached its conclusion we were still looking to find an opening of our own. An exciting finale to the game and we very nearly scored a stoppage time equaliser when Willian spotted Pedro starting to make a run. His superb long pass allowed Pedro to take the ball down and shoot, only for the ball to end up in the side netting. So close!

So the game ended in a 2-1 defeat but with that Mikel away goal there’s everything to play for in the return leg. A good team performance from us, everyone playing their part, except perhaps for Hazard who seemed quiet on the night. PSG played some quality football in parts, but they weren’t that great, and literally playing in a domestic league of their own, let’s face it, they’ve hardly been tested. I’ll definitely take that result, an end to our unbeaten run, but I think we can do it at the Bridge, we’re only at half time after all.