Back at the Bridge and another chance to extend our unbeaten run and maybe, just maybe come away with all three points. Because despite their current precarious league position, Newcastle are a bit of a bogey team for us.

In goal Courtois, with Ivanovic, Cahill, JT and Azpilicueta across the back. In front of those Matic with Fabregas playing slightly deeper, and Pedro, Willian and Hazard supporting Diego Costa up front, the fiery one our latest player to join the Chelsea legion of masked men, reported to have broken his nose in training. On the bench Begovic, Rahman, Loftus-Cheek, Kenedy, Mikel, Remy and Traore.

Just before the teams walked out we were treated to a short fireworks display, billed as a thank you to our loyal support, along with the free bottle of beer for those who like to get to the ground an hour or so before kick off. Personally I prefer to see the money spent on lower ticket prices but hey, call me ungrateful!

What an explosive start to the game, we looked positive and lively, really up for it. And we were soon rewarded when Willian carried the ball from the halfway line to the edge of the box, where Costa set off on a perfectly timed run to collect the ball and divert it into the back of the net while sliding in and taking defender and keeper with him. Brilliant!

And before 10 minutes were up we had doubled our lead. A free kick into the penalty box from Shelvey went straight to first defender Fabregas who hoofed the ball up field to Hazard, who was dispossessed on the ball, possibly a hint of handball. But sloppy passing from our visitors led to Pedro picking up the loose ball as he went on a lone dash towards goal, and finished with a beautiful shot into the bottom corner from the edge of the box. Comically, he launched into his celebratory run straight for the shell shocked Geordies in the corner of the Shed, before realising the home fans were on the other side!

What a start, and really good to see that we didn’t just sit back and protect the lead, our forwards looked on their toes, and our defence dealt with anything Newcastle had to throw at us and, to be fair, it wasn’t much.

And we took advantage of their poor passing again when Costa snuck in front of Coloccini, dinked the ball to Fabregas who launched the ball towards Costa who was already on his way towards goal, leaving the curly one in his wake, and with a perfectly timed pass across the box ahead of the approaching Willian it was goal three with just the keeper to beat. Three goals up and not even 20 minutes played, we were in dreamland!

It was pretty much all Chelsea, we were playing confident football, hassling Newcastle and not allowing them time on the ball. They were clearly frustrated and very poor as we looked to take advantage of any misplaced pass, and there were many of those.

But in a sour note to the glorious proceedings, shenanigans between JT and the clearly frustrated and nasty Mitrovic left our man limping, badly struggling on the pitch and he was eventually replaced by Rahman. With Ivanovic taking up the centre back position and captain’s duties, Azpi moved across to right back to free up the left back position for Rahman. Perhaps a more balanced defensive line than is usual. And with Hazard also receiving uninvited attention from an opposition resorting to bullying where their footballing skills had eluded them, and Willian upended just outside the box in stoppage time, we ended the half 3-0.

Second half and interesting to see how our back four settled in without JT’s direction and leadership. And while Newcastle were enjoying some early forays into our half, Mitrovic went down on the edge of the box under a challenge from Fabregas. But their attacking forays were few and far between, Mitrovic the only one who managed to come anywhere near scoring a goal.

But our quality shone through and as we approached the hour a signature long ball from Fabregas landed at the feet of the grateful Pedro and with a couple of strides he had left his markers for dead and stroked the ball past the keeper and into the back of the net. Four up and no hiding place for the Geordies, the boys in black and white frustrated and humiliated.

And that goal signalled our second change, the masked man Diego Costa replaced by Bertrand Traore, his job done and taking a well earned and needed rest ahead of our important Champions League game in Paris on Tuesday.

We were popping the ball around with ease, Newcastle little able to influence the game in any way. With 10 minutes left to play the effervescent and thankfully unscathed Willian was replaced by Ruben Loftus-Cheek, to a standing ovation from the appreciative home crowd. 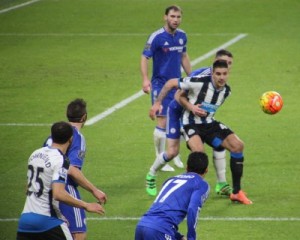 Within a couple of minutes yet another goal, a neat one-two on the edge of the box between Hazard and Azpi had our right back put in a probing pass towards the 6 yard box allowing the fast approaching Traore to push the ball into the bottom corner. Super one touch football from us. And it should have been six when another perfectly weighted pass from the magic boots of Fabregas fell into the path of Hazard but he just wasn’t able to control the ball and it slipped past the goalpost.

Five goals down but fair play to the travelling contingent who continued to sing throughout, especially as they had precious little on the pitch to make a noise about. But at least they had a consolation goal to keep them going on the long coach journey home, Andros Townsend with a run on goal and shot from just outside the box.

Shame about not keeping a clean sheet, but no matter, a resounding win and a fabulous performance, a high tempo game, slick one touch passing from the off. But most importantly, a much needed 3 points and a win to extend our unbeaten run and consolidate our change in fortunes. Have we finally turned the corner?

New UHF earpieces available for matchday use at Stamford Bridge