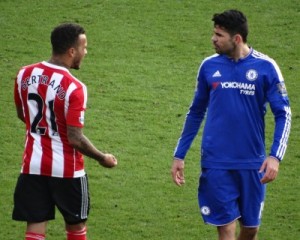 With the Disco Car in the garage, it was the train taking the strain as we headed to one of our most popular away fixtures at Southampton and St Mary’s Stadium, via one of the local hostelries favoured by home and away fans alike.

A familiar team lineup with Courtois in goal and the de-masked Azpilicueta, Cahill, captain Ivanovic and Baba Rahman across the back. With Fabregas and Mikel in their settled defensive midfield positions were Willian, Hazard and Pedro supporting Diego Costa up top. Bench warming duties were from Begovic, Matic, Loftus-Cheek, Kenedy, Oscar, Traore and Remy.

A cagey start to the game, the ball popping around the park, neither team taking control. But just 5 minutes in we were forced into an early change when Oscar came on for Pedro, who had pulled up with what looked like a hamstring problem.

The first real threats on goal came from the home team as they created some decent chances that didn’t quite come off, but the danger signs were there. Play then immediately switched to the other end in this ongoing ding dong battle, the game could have gone either way for much of the early minutes of the game.

As the half wore on and a corner that wasn’t a corner, where the ref from yards away overruled the linesman inches away, led to a passage of play that saw Charlie Austin’s dangerous cross into the box athletically headed clear by Gary Cahill. Another worrying moment to deal with.

Halfway through the first period Costa decided to lose his own mask, perhaps having trouble seeing where the goal was! We continued to plug away, but continually thwarted when we did get anywhere within goal sniffing distance.

But as we approached the end of the half we lost our concentration at the back, a ball headed forward by the home team was picked up by Baba Rahman who rather tamely nodded it sideways towards Cahill, but before he could blink Shane Long had intercepted the ball and went streaking towards our goal, and as Courtois approached to close down the angle, Long had chipped the ball into the back of the net while our defenders were still chasing back. A shame, and poor Baba looked mortified. But as we tried to make amends with a quick foray up the other end, the half time whistle blew with us trailing by that one goal.

Second half and a like for like change as Kenedy replaced Baba. A positive start to the second period and while we moved the ball around pretty freely our hosts once again seemed pretty adept at snuffing out our final ball. And the newly introduced Kenedy was clearly in need of some entertainment as he treated himself to a rabona cross into their box but all to no avail. And the acrobatics continued when Costa tried to leap into the air and get his boot on the end of a cross whipped in by Hazard, only to see the ball fly over the top of the crossbar. And the fiery one was certainly wound up like the proverbial coiled spring as he got himself embroiled in all sorts of shenanigans with half the opposition. But all was well with our cuddly striker as he lapped up the attention.

As we slipped into the last 20 minutes of the game the pace started to pick up and following an over optimistic shout for a penalty from the home side, Gary Cahill accused of handball, we found our equalising goal 5 minutes later. An intercepted ball and a quick counter attack had Eden Hazard streaking goalwards, with Costa’s movement ahead of him allowing a through ball into the box. As Costa kept the ball on the pitch in a tussle on the byline, he passed it back to the waiting Fabregas, whose dinked cross aimed at the far post sailed past Forster in goal, distracted by the approaching Hazard, the ball curling into the back of the net. Scores level and just the boost we needed, still plenty of time for a winner to be found.

It was backs against the wall for the Saints now as we pushed on, boo boy Diego in the thick of things supported by young Kenedy and our creative attacking force, Willian coming within a gnats member of the goalpost as his shot rolled across the turf. The attacks were coming in waves and so were the chants from the away end, the travelling support always in good voice. 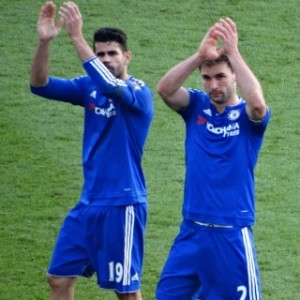 We certainly had the bit between our teeth, in total control of possession and the game, our forwards teasing the Southampton defence on the edge of their box. And our persistence eventually paid off with a corner in the final minute of regular time. A good high ball into the middle of the box from Willian, attacked by the leaping Ivanovic and nodded straight down past the helpless hand of Forster, defenders on both posts looking on defenceless and dejected. Cue delirious scenes in the away end and an ecstatic bundle of blue in front of goal, as the shared delight of supporters in the stand and our team on the pitch was celebrated in unison.

As the disconsolate Southampton fans left the stadium in fire drill like droves, we saw out the time added on with a late time wasting replacement, Matic on for Hazard. The final whistle blew and a great victory from our boys, good to see that fighting spirit as we continue to retrieve our season.

And so back to the pub for a celebratory drink before heading back to the station and a train full of happy, and slightly inebriated, Chelsea fans. A top day out!

Home Tie In The Carabao Cup