Back from our travels in the Champions League and our attention turned to domestic silverware in the FA Cup. With talk of our opponents putting out a youth team we’re on a hiding to nothing, where nothing less than a resounding win will do, otherwise we’d never hear the last of it.

With JT still on the sidelines it was the same starting 11 we saw in Paris; Courtois in goal with Azpilicueta, captain Ivanovic, Cahill and Baba Rahman across the back. With Fabregas and Mikel were Willian, Hazard and Pedro, with Diego Costa up front. On the bench were Begovic, Miazga, Matic, Loftus-Cheek, Oscar, Traore and Remy.

The first few minutes of the game seemed even enough, the lads in the luminous kits and the bingo squad numbers knocking the ball around with some confidence, Faupala looking pretty useful.

But a bit of a worry when Cahill went down after a few minutes and requiring some attention from the medical staff – I bet Matt Miazga started to get a bit excited as he jumped up for a run on the sidelines! And a few minutes later Cahill would require more attention, this time for a nosebleed after a head to head challenge with the City forward. Our Gary certainly likes to put himself about.

But it wasn’t long before the spirited exuberance of the visiting boys, and some very experienced City players let’s not forget, calmed down and we assumed control of the game. And the first sign of things to come when Pedro the terrier skipped into the box on a one-two with Fabregas as he chipped the keeper Caballero only to see his well worked attempt hit the post.

We were totally dominating play and possession, our young visitors content to let us move the ball around freely, relying on their more experienced defence to hold us up, hoping for a counter attack opportunity themselves. But we kept hold of the majority of the possession and took every opportunity to test out their nervous keeper. Surely just a matter of time before their defence was breached.

And the breakthrough we fully expected finally came on 35 minutes as a result of more patient build up play from us. A ball knocked into the box by Fabregas and into the path of Hazard with his high cross from the byline into the 6 yard box where Costa was waiting to head the ball straight into the back of the net under no challenge whatsoever from the keeper while the two defenders just stood there gazing at our man as he put us one up. No more than we deserved.

They do say that the best time to score a goal is immediately after conceding, and the young boys certainly did that while we were still celebrating our opener and our defenders had inexplicably switched off, the ball rebounding off Faupala for an equaliser after a decent cross in. At least nice to see the goal bring the travelling fans to life, we forgot they were there, especially in view of the half empty away end.

Thankfully our heads didn’t drop after the quick equaliser and we were soon back in the thick of it, Pedro a massive threat with his little legs going like the clappers and getting into so many dangerous positions. Love the way we were really pushing for a second goal, our front men creating all sorts of chances. But, in the ascendency, the half ended with the scores remaining 1-1.

No changes for the start of the second half, and it wasn’t long before we split their defence apart, Hazard and Willian streaking up the pitch and between them saw Hazard’s deft through ball for Willian to slot the ball across the keeper and in off the far post. Too easy, and just waiting for the floodgates to open now. 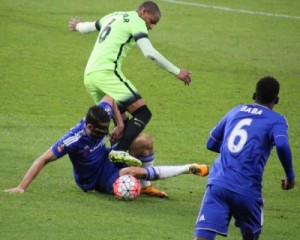 And we only had to wait 5 minutes before another goal came, once again Eden Hazard with the assist that found Gary Cahill via a fluffed clearance, when he blasted the ball straight at the keeper and into the back of the net. One Gary Cahill, there’s only one Gary Cahill!

With the game effectively over and the away fans invited to have a pleasant journey home after a nice day out (!), the home fans were in buoyant mood, no doubt a reflection of the positive performance on the pitch. All four stands of the Bridge were in good voice, and hats off to the ends for keeping the noise and the atmosphere going.

We were a pleasure to watch, even our resurgent John Obi Mikel enjoying himself with some silky skills, much to the delight and appreciation of the home fans who sung his name in recognition of his new found role in the team.

With just under half an hour left to play Hazard once again found himself on a run with the ball towards goal when he was upended on the edge of the box. A great chance to extend our lead, and Hazard was given the nod ahead of Willian to take the free kick. And who could deny him that peach of a goal, straight through a gap in the wall and into the bottom corner of the goal, keeper rooted to the spot in the wrong place. I’ve rarely seen so much delight from players and fans alike for someone to score a goal, and Hazard’s little smiling face, bless him!

Twenty minutes left and our first substitutions, Traore on for Costa, with Oscar replacing Pedro, to much applause from the fans for jobs well done. And it was just a few moments before Oscar had a long range effort just off target.

Fifteen minutes to play and a penalty awarded as Traore was bundled over in the box by Demichelis. A soft one perhaps, and so was the penalty kick from Oscar who tiptoed his way to side foot the ball into range of the keeper who saw the ball safely out. Not his best effort.

Our final substitution came with just under 10 minutes to play, a standing ovation for John Obi Mikel as he made way for Nemanja Matic.

It really was a training game, and although City did have a few moments in front of our goal, including a saved shot from Kolorov towards the end which was safely stopped by Courtois, anything that looked remotely threatening was snuffed out comfortably.

Approaching the end of the 90 minutes and a fifth and final nail in the coffin of the visitors when a probing cross into the box from Oscar found the head of Traore whose header on to the far post managed to drop into the goal behind the hapless Caballero, under pressure from Hazard.

A resounding and an easy victory in the end, everyone played their part, Hazard and Fabregas especially influential. I’m so glad we didn’t play with the attitude that the game was already won once it was confirmed that the majority of the opposition players were teenagers. It’s fair to say that it was a game of men v boys, but we can only play against the team put up against us.

Thoroughly enjoyable evening at the Bridge and fantastic to see lots of kids with parents and grandparents in the crowd, the youngsters in particular making lots of noise cheering our team on. No doubt due to reduced ticket prices for the cup game and many regular season ticket holders giving the game a miss.

So into the quarter finals of the FA Cup we go, the draw throwing up an away trip to Everton next month. Come on you Blues!

Ramires and Mikel’s finest hours in their own words