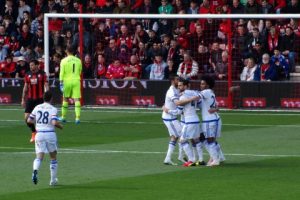 A stand out away game when the fixtures were first announced; at the start of the season visiting for a beach party celebrating our title push at the end of the campaign, now we just settled on the beach party. With many weekend trips planned we headed to the south coast for our visit to the smallest capacity ground in the Premier League at just under 12,000, making tickets for the fixture like gold dust. A good pre-match catch up in a couple of Boscombe’s finest hostelries and we made our way to the Dean Court Stadium on a fine and sunny St George’s Day.

With Courtois suspended we had Begovic in goal, with Baba Rahman, captain Ivanovic, Mikel, again taking up that centre back position, and Azpilicueta across the back, Matic and Fabregas just ahead. In attacking midfield we saw the welcome return of Eden Hazard recovered after his niggly hip injury, alongside Willian and Pedro, supporting Diego Costa up front. Mysteriously, Cahill was declared ill – perhaps he caught something from Oscar! On bench warming duties were Amelia, Miazga, Loftus-Cheek, Kenedy, Traore, Falcao and Pato.

Kicking off in the beautiful south coast sunshine, seagulls silhouetted against the bright sky, fans of both sides were in good voice and the home team were beginning to get the better of the early settling in knockabout. But after just 5 minutes we were the ones who took the initiative, Fabregas collecting Costa’s ball and sending Pedro on his way with one of his probing passes, his little legs streaking towards the Bournemouth goal and with only the keeper to beat, he dinked the ball into the back of the net. What a great start! 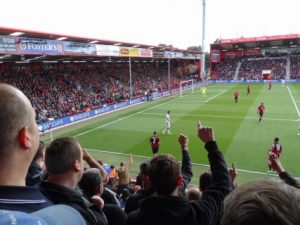 The game continued as a keen contest, both teams having space to move the ball around freely, an open and enjoyable game, and plenty for the well oiled away contingent to sing about. While it might not have been top notch quality football, it was end to end stuff with half chances being created, Eden Hazard looking a lot more like the player we know he is.

On 25 minutes we had a great chance to double our lead when Costa was upended a couple of yards outside the box, but for reasons best known to himself it was captain Ivanovic who pulled rank and blasted the ball straight into the wall, rather than leave for one of our free kick specialists. Don’t think he’ll be doing that again in a hurry!

We didn’t have it all our own way though, Begovic was being called into action on more than a few occasions, each time the ball seeming to get closer to its target. But with the half hour just passed, we did finally find our second goal; the rejuvenated Hazard collected the ball just outside the box and with time and space simply blasted a low shot through the defence and wide of the keeper, straight into the back of the net. And, bless him, he looked so happy, and no doubt delighted to be back on the score sheet.

But what do they say about the best time to score? Yep, straight after conceding, while the opposition’s heads are still in celebratory mode. And that’s exactly what the home side did, first testing Begovic with a ball that required tipping over the crossbar, then the resulting corner eventually found the head of Elphick whose ball headed into the ground seem to defy gravity and bounce high in the air before eventually dropping into the goal beyond the reach of our keeper.

That goal inspired the home team to take advantage of their ascendency and look for an equaliser, and the game certainly picked up as a result, so much space on the pitch that either team could have scored again. But despite a late golden opportunity from Pedro and a dismissed penalty shout at the other end, the score remained 1-2 at half time. 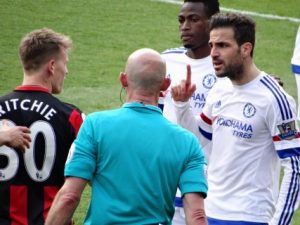 Second half and while we were recovering from the affects of the blue smoke emanating from the concourse, and with no changes on the pitch, we restarted the game. And five minutes in a great chance when Baba Rahman crossed the ball in front of goal, but Costa just wasn’t able to get a toe on the end of it. We continued to move the ball around crisply; like the first half, the space afforded allowed us to take an increasing hold on the game. But it was still a very open and competitive match, clearly not played with the intensity of a game with everything to win or lose, but an entertaining one nonetheless, both sides playing without pressure.

Into the final 20 minutes and we started to threaten, the superb Fabregas and the lively Hazard linking up in front of goal, if only our little Belgian had the confidence to take the shot on goal himself, instead of laying across a short pass to Costa who wasn’t able to collect, surrounded by the opposition defence. But the ball was soon back in our possession, again it was Fabregas who threaded a perfectly weighted ball into the path of Willian as he approached the box and as he ran into the area he committed the keeper Boruc, and simply chipped the ball over him and into the back of the net.

Cue a few rounds of the Willian song (he hates Tottenham!) from the travelling faithful, very much enjoying our day out. Our boys on the pitch were enjoying their day out too, and good to see some smiles return to the faces of fans and team alike.

With 10 minutes left to play our first and only change, Willian appeared to go down with cramp. On came Ruben Loftus-Cheek while our goal scorer strolled off the pitch. We were now winding down the clock and in full control.

As the game drew to a close, and to the resounding cries of “you better beat f*****g Tottenham” our boys were left in no doubt as to our expectations at our next game, a title ending performance against our north London rivals a must next weekend . The away fans were in good voice and in a feisty mood, on the one hand singing the usual homage to our captain, leader and legend JT, on the other hand telling Emenalo where to go. Both were sitting in the stands opposite. 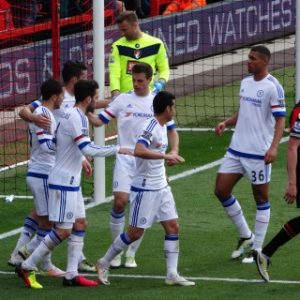 As we went into 5 minutes of time added on, Hazard was delighted to score his second and Chelsea’s fourth goal, Matic picking up a sweet ball from Fabregas, and taking it to the by line on the edge of the 6 yard box before a short pass back to Hazard who simply pushed the ball past Boruc to cap off his triumphant return.

A great confidence building win in the end, nothing too strenuous, and hopefully a good run out in preparation for the main event next weekend. So glad Eden Hazard had a good game, and hopefully the full 90 minutes and a couple of goals will increase his confidence. All in all, a fabulous day and weekend, as we headed off to savour the delights of Bournemouth town.

As we rise to the dizzy heights of 9th in the table I’m not kidding myself that all is now well at the Bridge after one half decent performance at the back end of a dismal campaign. And while we will all delight in a good performance and points taken from Spurs when we play them next, it comes to something when our whole season has come down to spoiling it for someone else, as fun as that might be under the circumstances.

A little bird told me that we will see JT play before the end of the season, and hopefully it will be against Spurs, but while he is still our best centre back and still one of the best in the country, it’s madness that he still hasn’t been offered the contract that he and every fan of the club wants. The club hierarchy have been on a charm offensive with the fans for most of this season, with so many quotes in the media as to how great we all are etc, etc. But actions always speak louder than words.