The final game was upon us, after a miserable season that started poorly and never got any better. But we did avoid relegation, so mission accomplished as far as Guus Hiddink was concerned.

We welcomed the newly crowned Premier League champions Leicester to Stamford Bridge, gave their team the customary guard of honour and also a fitting presentation for former Chelsea Manager Claudio Ranieri. It was a perfect touch, and it was enough. At the same time a magnificent banner was unfurled in the Shed, paying homage to our captain, leader, legend JT as news broke that he had been offered a 1 year contract extension, but, as he told us, in a different role.

With the niceties over with, we turned our attention to the game, although there was nothing to play for except perhaps the chance to give our youngsters some more minutes of game time.

In the team lineup were Courtois in goal with Azpilicueta, Cahill, captain Ivanovic and Baba Rahman across the back. Supporting Fabregas and Matic in those holding midfield positions were Pedro, player of the year Willian and Hazard in the creative roles, with Bertrand Traore the lone striker. On the bench were Begovic, Loftus-Cheek, Kenedy, Oscar and Pato, plus academy lads Fikayo Tomori and Tammy Abraham.

Sporting next season’s new kit, our boys kicked off in the sunshine and it wasn’t long before a decent penalty shout went up as Fuchs appeared to handle Willian’s chip into the box. Nothing given of course. Very positive from us in the opening minutes, a shot from Pedro going just wide. 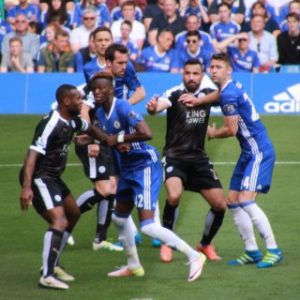 Needless to say the away fans were in good voice, they were understandably in party spirits, but it felt very wrong for many of the Chelsea fans to join in so readily. Stop it!

The game continued as the holiday kick about it was, and the home crowd were clearly restless by the volume of muttering that could be heard. Someone please pinch me when things start to liven up!

On 26 minutes we woke up, as the fans in the Shed displayed their ‘Terry 26’ placards, to the rousing applause from the rest of the home fans, acknowledged by the man himself sitting behind the dugout. A poignant moment that the club hierarchy would not have failed to notice.

Thankfully the pace of the game soon picked up with a few half chances being created at both ends, Traore was lively for us but not really finding the target. We were playing the now customary patient game, pass upon pass outside the box, waiting for the right time to strike, and a one two with Fabregas almost gave Willian the goal the game needed when his quick fire shot was saved by the young Schmeichel.

A flurry of activity just before half time saw successive short range shots on goal from Fabregas, Baba and finally Pedro who found the back of the net only for it to be ruled offside. HT 0-0.

Second half and no changes, while the fans slowly returned to their seats to resume their end of season chats amongst themselves.

But just a few minutes in, something to get excited about, on came Tammy Abraham and Ruben Loftus-Cheek in place of Traore and Pedro respectively. And it wasn’t long before our young striker was sent on his way with a long ball played forward by Hazard, only to be stopped in his tracks as he approached the box.

In our third and final change another of our talented youngsters was introduced, Fikayo Tomori replacing Ivanovic, our young academy player of the year and the lad responsible for putting Diego Costa in a face mask following a training ground challenge earlier in the season. So not one for shying away from a scrap!

The game continued in its end to end way, and while at a slightly higher tempo and entertaining enough, it was still at a training pace. But finally some action, when Eden Hazard did one of his twinkle toes runs into the box, passing the ball to Abraham whose short range shot was blocked. But the rebounded ball was picked up by Matic who strolled into the box in his long legged lazy style, only for Schlupp to dive in and upend our man as he fell in slow motion to the ground. Penalty!

As the fans called for Eden Hazard, up stepped Fabregas to take the penalty, and with a hop and a skip he had sent Schmeichel the wrong way. Hopefully we finally had a competitive game on our hands.

But not really, more of the same end to end passing, the Ranieri testimonial in full flow with the Leicester fans seeming to orchestrate the home crowd. Call me a killjoy, but it all seemed over the top to me. The height of sycophancy, cheering their corners and a standing ovation for Mahrez? Come on!

But no sooner had that substitution been made, Leicester had equalised, Drinkwater given acres of space to fire a shot from outside the box past Courtois in goal.

As peace and equilibrium was restored to the game, we played out the final few minutes. Willian was looking tired and Hazard seemed to be struggling, but there were no substitutues left to replace them. And following a final burst of pace and a decent shot on goal from Abraham, the full time whistle eventually blew, to put us out of our misery.

Many of our fans stayed behind for the players’ lap of appreciation, but for me I wanted to see JT for what might have been his last appearance at the Bridge. He gave an emotional speech, thanking Guus for his time with us. But his highest praise was for us, the loyal fans who support the team, even through the toughest of times.

A tough, miserable season on the pitch, one I am glad to finally see the back of. Off the pitch though, always a pleasure to catch up with likeminded and passionate supporters and I am already looking forward to next season when the new fixtures are released on June 15th. I look forward to seeing the changes our new manager Antonio Conte will make, both in personnel and style of play, and also getting ourselves back into our rightful position competing at the top of the best league in the world.

Enjoy the summer and in the meantime, keep the blue flag flying high!

Everything You Need To Know About 2020/21 Season