Always one of the stand out away games of the season, an easy train journey from south west London towards the south coast and a great atmosphere all the way from the pre-match hostelry where opposing fans freely drink together, to the ground where supporters of both sides are free to support their team without fear of aggravation. In truth, the vast majority of away days are like that!

In pleasing team news, the same lineup that convincingly defeated Man Utd; Courtois in goal, with Azpilicueta, Luiz and captain Cahill as the centre back trio, supported by Moses and Alonso in those all important wing back positions. With Kante and Matic as Little and Large (I am showing my age there!) in the middle of the pitch, were Pedro and Hazard on the flanks, with the big man Costa up front. On bench warming duties were Begovic, the welcome return of Ivanovic, JT, Chalobah, Willian, Oscar and Batshuayi.

Following a well observed and moving minute’s silence in honour of the upcoming Armistice Day, we kicked off against an on form Southampton.

A cracking game in store, both sides looking up for it and either team could have opened the scoring during the early exchanges, play moving freely between both ends. But it was our boys in blue who took the initiative and took the lead after just 5 minutes, Hazard using Moses to return the ball as he danced his customary undetected skip into the box, jiggled past a couple of defenders before stroking the ball through the legs of Forster at close range and into the back of the net, and from the tightest of angles as well. All too easy really, what a start! 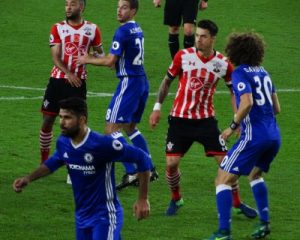 The game continued at a blistering pace, as the away fans kept up the noise levels, vocal chords suitably lubricated. And undeterred by the goal against them, Southampton were not averse to getting forward themselves, but our remoulded defensive-aware outfit were wise to whatever they wanted to throw at us. And they did throw quite a bit at us as the game wore on, but lately you feel that our defence is made of an impenetrable blue barrier, that moves, shifts, expands and contracts to suit the threat. They really are a sight to behold when they’re in full flow.

We weren’t creating a whole load of nailed on chances until later on in the half, but when we did get possession we looked dangerous, Hazard especially slicing through those red and white shirts, and a late chance saw Costa’s shot blocked by the long legs of Forster. HT 0-1.

No changes at half time, the boss must have been more than ‘eppy with what he’d seen so far, more of the same please. A positive start to the second half and just a few minutes in we split their defence apart when a superb cross pitch ball from Kante found Alonso out wide ready to collect the ball and take it, unchallenged, into the box. With Hazard and Costa streaking down the centre of the pitch, it needed a last gasp clearance by the defender to prevent Hazard from getting on the end of the probing cross in front of goal. So, so close!

And 10 minutes into the restart came the inevitable Costa goal, after first earning a free kick off Chelsea old boy Oriol Romeu. From Luiz, to Hazard, to Costa on the edge of the box and with just a couple of side steps he found the space to let rip into the corner of the goal right in front of us away fans. It was a wonder to behold from behind the goal, tracking it all the way from Costa’s right boot, rising up in its arced trajectory before dipping and buried deep into the back of the net, Forster helpless, and his dumbfounded defence merely spectators as the ball looped over their heads.

The scenes in the away end were ecstatic and actually quite magical, the realisation from the Chelsea faithful that we had witnessed at such close quarters an amazing goal from an amazing striker in such top form. And at this point a special shout out to my away end mates who were on top form themselves all afternoon, adding icing to that celebration cake, you know who you are! Ole, ole ole ole, Chelsea Chelsea!

At this stage the result of the game was never in any doubt, players and supporters alike with a new found confidence, any nagging doubts from last season’s debacle slowly but surely melting away, game by game. We were on fire, wave after wave of blue surges, wingmen Alonso and Moses as outriders in support of front men Costa and Hazard who were firing on all cylinders.

With an hour gone we really should have been 3 up, another breakaway move with Hazard streaking up the pitch flanked by Costa and Moses. A pass to Moses and the space for him to shoot, only for his attempt to rebound from the arms of the keeper before dropping nicely for Hazard to lay a short pass to Costa and then to Pedro. But our boys just couldn’t dig that ball out and into the goal, despite my words of encouragement “one of you, get that f£&?ing ball into the back of the net!” By that time the stripy defence had pushed us back and had mounted a counter attacking move of their own.

You had to feel sorry for Eden Hazard though, now looking like the player we all know he is and really enjoying his football, a measure of which was the number of times he was fouled, purely as a means of the opposition halting our progress, he was truly unplayable at times.

They had their moments, Southampton; a free kick finding the head of Davis but his shot just clearing the crossbar and covered easily by Courtois. But their corner came to nothing as our lines were cleared and we were on our way once again.

With 15 minutes left to play we saw Pedro replaced by Willian, as we continued with the game, very much slowed down as we passed the ball around like a team full of confidence and taking chances as and when they presented themselves, a shot from Moses on the edge of the box having to be blocked by Forster.

With the clock ticking down the unexpected actually happened when Charlie Austin had the ball in the back of our net, only for his shot to be ruled offside. Poor Charlie, he wasn’t having a good day and luckily our momentary lapse in concentration wasn’t punished.

With the game entering its closing minutes Ivanovic came on for Moses, to a rapturous round of applause. A lot of love for our Victor, the nearly forgotten man given a chance by Antonio Conte, a chance he is working hard to take advantage of.

Our final change, Costa was replaced by Batshuayi for the closing few minutes, a job well done for the big man up front.

We were playing out this game for fun, and the travelling support were treated to an assured performance and yet another clean sheet in the League, four in a row now. We were so impressive; the way we were fighting for the ball, fighting for each other, a newly found determination to succeed, goals, clean sheets, forwards, defenders, the whole team singing from the same hymn sheet, and in tune as well. Long may it last.