Yet another ‘morning’ fixture, but not too far to travel for the south east based Blues support, and although rail disruption was feared, everyone seemed to get to the delightful suburb of Croydon with no issues, the pubs well rammed for a few pre Christmas beverages.

It was a cold and foggy day, and as we approached Selhurst Park, we could barely make out the floodlight towers at the far end of the stadium, and wondered how much of the pitch we would actually be able to see. But thankfully the fog slowly evaporated into a lingering mist as the teams warmed up, as I gave the chock-a-block away concourse a miss – not the most salubrious surroundings, but the music being played by the Palace DJ was putting everyone in the party spirit.

Kicking off in the gloom, we could just about make out the ghostly figures of our boys playing in their white away strip. It was a lively start, both teams dashing about to try and gain an early advantage. Our manager was doing his bit on the touch line to keep our boys on their toes and the Chelsea fans were also in good voice, urging our team on. But how those so-called Palace ‘Ultras’ can tolerate that infernal drumming for any length of time I don’t know, does my head in, and I’d hate to be nursing a hangover in that corner of the ground.

On the pitch the teams were pretty much cancelling each other out, both getting the ball up and down the pitch and both equally giving the ball away – a pretty scrappy affair. But as the half wore on we were steadily settling into the game, our creative boys stringing some neat passing together and, inevitably, it was a cynical foul on the twisting and turning Hazard that presented us with a promising free kick just outside the box. Sadly it wasn’t to be, Luiz’s low shot on goal deflected out for a corner that was equally unyielding.

Straight up the other end and Palace’s quick movement and first time ball nearly caught us napping, but for a wildly off target final ball. We really did need to be on our guard.

We knew the time would come eventually, and after 20 minutes of the game Diego Costa was finally shown that 5th yellow card by veteran referee Jon Moss that will see him miss our next game at home to Bournemouth. A pretty soft challenge, but if it was going to happen eventually, it may as well be now, and I suspect our Diego might be indulging in a celebratory cerveza on Christmas Day, just the one to be social, mind!

It was becoming plainly obvious what the Palace tactics were; get on the case of Costa. Well, after he had been ‘awarded’ the yellow card they weren’t missing an opportunity to have a little niggle at him. And there was Hazard too, who once again was just unplayable, literally running rings round defenders with their inability to deal with him without resorting to leaving a foot in, whether deliberately or because they were just too slow.

Hazard was tripped off the ball by Zaha, and several farcical minutes later he was still arguing with the referee and his teammates before the free kick could finally be taken by Willian, which was sadly cleared. No idea what that was all about!

Come on Chelsea, come on Chelsea…..the game was intriguing and frustrating in equal measure, and with little by way of clear cut chances being created at either end, the game needed that little bit of magic to lift it out of the scrappiness. I really enjoyed the little piece of skill by Hazard when a cleared ball from Alonso was plucked high out of the air by the foot of our bouncing Belgian, before the ball eventually found its way back to Alonso. But that opening goal still eluded us. 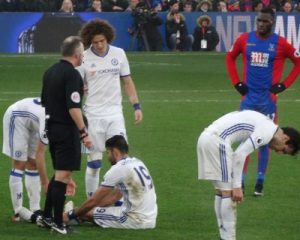 Approaching half time and Palace were awarded a free kick just outside the box, following a foul by Alonso on the whinging Zaha. Thankfully Puncheon’s shot cleared the crossbar, the Palace forward posing quite a threat throughout the game. But if Palace were getting closer to goal it was, who else, Diego Costa, who made the ultimate breakthrough.

A beautifully weighted pass from the superb Azpilicueta floated towards Costa in the box, and as the ball dropped he simply used his head to guide it past Hennessy in goal. With Costa surrounded by two defenders, the ball and a desperate third defender landed together into the back of the net. What a time to score and with that the half ended with us that one goal up.

Start of the second half with no changes, and we continued as we left off. It was lively enough, trying to carve out the few chances that fell our way. It was all a bit frantic, Moses bizarrely throwing the ball out for a Palace corner before Kante had a blast at goal at the other end.

But for a good few minutes it was all Palace, all hands to the defensive pump as we soaked up the pressure. In amongst the melee Kante was booked for the heinous crime of persistently tackling an opposition player (how dare he!), but it wasn’t until later that I realised he too would miss the Bournemouth game, our little terrier joining Diego on the naughty step!

Just past the hour and our first change was made, Willian making way for Fabregas, who made an immediate impact causing mayhem in the box. A few minutes later some swift movement down the right between Fabregas and Moses eventually saw the ball lofted across the box, allowing Alonso a volleyed shot on goal, only for the ball to be blasted into the side netting.

It was end to end stuff, Palace clearly needing that equaliser as we went into the last 20 minutes of the game. But while they pushed up they were always vulnerable to the counter attack, and we exploited it well as we cranked up our own pressure on their goal, Alonso having another shot saved. Fabregas was making all the difference, directing the play with his expert vision.

Approaching the final 10 minutes and Ivanovic was brought on to replace the ever industrious Victor Moses. We were really stepping it up now, some slick, quick passing towards goal, all courtesy of the pinpoint passing of Fabregas, before Hazard was once again felled just outside the box. The Palace defence had no other way of stopping him; our man was on goal otherwise. It was Alonso who fancied his chances with the free kick, rattling the crossbar as his shot rose and dipped over the wall and Cahill unfortunately wasn’t able to deal with the rebound. Meanwhile, at the other end, we had the measure of everything they could chuck at us, Courtois a safe pair of hands when called upon.

Our final substitution saw Costa replaced by Batshuayi as we entered the final couple of minutes of regular time, and with that change we safely saw out the game.

As Conte and Co were all smiles and congratulating each other at the end of the game, the travelling fans celebrated with them as they made their way towards the stand to the resonating sounds of Antonio….Antonio. Antonio’s face was a vision of joy, as we all celebrated 11 wins in a row and reaffirmed our place at the top of the Premier League.