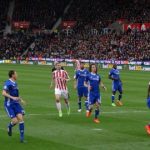 We kind of know what we are up against when we visit Stoke, always a potential banana skin. The thugs in the Stoke side would set about playing to their singular strength of hacking down opponents and the dark art of intimidation very close to the edge of the rules. It would need a strong referee to take charge of this one and, having seen a number of his performances in the past, I’m not sure Anthony Taylor was the right man for the job.

There was one major change to our starting lineup with Eden Hazard reportedly suffering from a leg injury, maybe just as well he didn’t travel given the type of game we could expect. It was still a familiar starting eleven; Courtois in goal with Azpilicueta, Luiz and Cahill on centre back duties supported by Moses and Alonso on the flanks. Our starting midfield maestros were the ever present Kante alongside Matic, with Willian and Pedro floating around Costa up front. On the bench were Begovic, Zouma, Ake, Fabregas, Loftus-Cheek, Chalobah and Batshuayi. No JT?

Suitably refreshed (despite the local police advising Chelsea supporters not to use the town centre pubs because the locals don’t like outsiders – what is this place, Royston Vasey?!), the away contingent were in good voice in the windy city, a ground with open corners that allows the icy elements to blast through the ground. An up-and-down-the-pitch start to the game and it wasn’t long before those bully boy tactics were in evidence as the blue shirts started to hit the deck. We needed all our speed and guile to show these mugs up for what they were.

It was from a free kick following a foul on Alonso that our opening goal came, Willian expected to float a probing ball into the box. But just to confuse everyone, he aimed a lower ball towards to the near post leaving the Stoke goalkeeper Grant scrambling about to stop the ball from crossing the line, but he just wasn’t quick enough. One up before the quarter hour was gone. 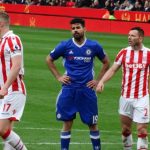 Clearly not in their game plan, the Stoke thugs set about trying to intimidate our Diego, our poor misunderstood shrinking violet, but instead our man received a yellow card for daring to get a bit hacked off with all the attention he was receiving.

Our quality was clear to see as we took control of the game, our speed on the ball too much for those lumbering Neanderthals. So it came as no surprise that when they did get the ball into the back of the net from a corner, the goal was ruled out because Azpi was shoved to the ground.

But a few minutes later the softest penalty you are likely to see, that hefty clown Walters dropping like a stone in the box under the weight of Cahill’s breath on the back of his neck. Give me a break! The curse of Anthony Taylor strikes again, how the guy earns a living from this game I will never know. The penalty was duly converted by the mortally wounded Walters.

The inevitable soon followed, tempers flared as Shawcross piled in on Costa and soon after Bardsley had a go leaving our man writhing in pain on the ground. Nothing wrong with strong challenges, but this kind out deliberate thuggery is dangerous. HT 1-1.

Second half and the game was there for the taking, we were out of the blocks from the off as we piled on the early pressure. It was a tough game and a typical style of tussle against a team totally lacking in finesse. We were dominating possession and we passed the ball around well, but chances on goal were confined to set plays from corners and inevitable free kicks as the opposition had to stick a boot in to halt us in our tracks. 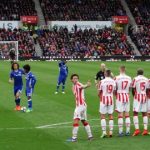 An hour of the game gone, and following the clear hacking down of Pedro we were awarded a free kick a few yards outside the box, with Luiz, Willian and Alonso lining up to shoot and keeping the red and white wall guessing. It was Alonso who got the nod and he wasn’t far away as his shot clattered the woodwork, wall and keeper beaten.

Twenty minutes left to play and our first change saw Moses replaced by Fabregas as we pushed on for a well deserved winner. We were cranking things up nicely, the cultured passing of Fabregas carving open the Stoke defence allowing us to work the limited space. The thugs were getting frustrated and we were knocking on the door, not content with the single point for us.

Into the final 10 minutes and Matic was replaced by Loftus-Cheek to further replenish the midfield. The game was livening up nicely as we were willing on the winner. It was all guns blazing as we pushed them to their limits, RLC having an immediate impact, hassling the defender to force a corner. Luiz was there to nod down the floated corner from Fabregas, sending the defender off balance and allowing Cahill to blast the loose ball into the roof of the net.

Absolute mayhem in the away end as the travelling faithful went crazy, limbs all over the shop as they say, as our boys in blue ran towards us to join in the celebrations. What a goal, and what a time to score it, one of those ‘where were you’ moments for sure. We shall not be moved. 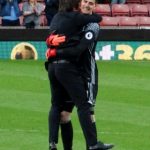 Our final change had Willian replaced by Zouma, as we turned the screw even further looking for a third goal, Pedro, Costa and RLC all having a go; brilliant to see our unwavering positivity and belief, always fighting to the end.

Into stoppage time and as the Stoke fans had already given up and left the ground in their droves, they were shortly followed by red carded Bardsley who could no longer hold the little composure he possessed as he bundled Fabregas over the by line as he was trying to work a corner. Cheerio, cheerio, cheerio…..and good riddance!

Final whistle and a big, big win for us – you could tell from the reaction of Antonio and the boys as well us supporters what it meant to all of us.

Come on you Blues!