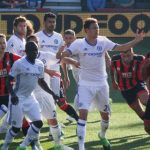 Chelsea fans love a trip to the seaside, so with another game scheduled in April at Bournemouth and the forecast for some beautiful weather, many of us took the opportunity to spend some time down there, after all, isn’t that what away trips are all about? And with match tickets as rare as hen’s teeth, there were plenty of Chelsea fans around the town watching the game in the pubs and soaking up the atmosphere as well as the warm sunshine.

In the starting lineup were Courtois in goal, with Azpilicueta, David Luiz and captain Cahill in our settled back three, with the returning Moses and Alonso taking up their respective positions on the right and left wings. Inside them were Kante and Matic, with Pedro and Hazard providing the legs to support Costa up front. On the bench were Begovic, JT, Zouma, Fabregas, Chalobah, Willian and Batshuayi.

With a tea time kick off to accommodate TV coverage, the sun was low in the sky causing havoc for the away fans having to squint our way through the game. Note to self – bring a hat next time!

It nearly went spectacularly wrong in the opening minute when David Luiz almost managed to use his raised boot to divert the ball goalwards, but thankfully Courtois was wise to it. His curly hair as well as the sun must have been in his eyes, which would explain why he eventually decided to tie his hair back. 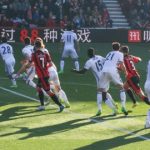 It was pretty much even Stevens over the first few minutes of the game, both teams having some decent possession. The travelling Chelsea support was in superb voice, vocal chords no doubt suitably lubricated following a few hours in the local hostelries.

Our first goal finally came after 15 minutes, started by a fabulous long ball from Luiz up to Moses, whose square cross into the box found Costa, who just swivelled his ungainly frame under challenge, took aim and fired, although his shot looked to deflect off the diving-in defender before the ball rolled into the corner of the net. We’ll take that, thank you very much!

And within a couple of minutes we had set up a counter attack to double our lead, Kante with a pinpoint accurate long pass towards Hazard who was already streaking up the pitch and by the time the red and black shirts had caught up with him and their keeper had come out to greet him, our Eden had skipped round them all and rolled the ball into the goal, leaving a trail of destruction in his wake. It is always a pleasure to witness such a delightful goal from that little fella, even if the blinding sun was making things a bit difficult.

The general play was a bit untidy at times, as both teams fought for the ball and closed each other down, although we were riding our luck at the back when Afobe’s clear shot on goal rebounded off the post. The home team were looking like they meant business in and around our box, while we were always capable of moving the ball quickly up the other end. The next goal was anyone’s. 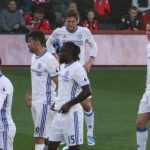 But just when we thought we were drifting into the half time break with the two goal advantage, Bournemouth managed to pull one back, a quick breakaway move, King with space to shoot from the edge of the box, the ball flying past the leaping Courtois as it looped up via the backside of David Luiz and into the back of the net. They continued to have the bit between their teeth looking for an equaliser but thankfully half time arrived with the scores still at 1-2.

We were looking lively at the start of the second half, our boys making good use of the space in front of the away section. But the home team were still trying to get that equaliser, and came very close when a low shot zipped just wide of the post. But I felt that the game was under our control and we so nearly extended our lead when a short cross from Alonso into the 6 yard box went skimming past Costa who really only needed to stick a boot out to score.

But following a pretty flat spell of the game we slowly began to crank up the pressure, a few passes being dinked into the box, switching from one side to the other as we pushed to secure the win with a third goal. And it wasn’t long before we were awarded a free kick just outside the box with Luiz and Alonso both hovering over the ball. But it was the Spaniard who took charge as he lofted a superbly weighted shot over the wall and past Boruc in goal, both him and the wall rooted to the spot. 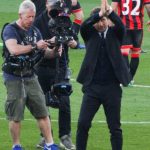 What a strike. It was mayhem in the sun drenched away end, as our jubilant players made their way over to join us in the wild celebrations, surely the 3 points were in the bag now with just over 20 minutes left to play. And also another step closer to the title, we shall not be moved…..

We seemed to be going through the motions with the game all but won, as we entered into the last 10 minutes. Our first substitution had Eden Hazard replaced by Cesc Fabregas, shortly followed by Willian on for Pedro, as we continued to push the ball around the midfield.

The game was petering out, but not before a final time-consuming substitution that saw Zouma come on for Moses, the player furthest away on the pitch of course.

Final whistle and an easy game in the end, despite Bournemouth getting that goal back. A well earned 3 points to maintain pressure on the chasers at the top of the league. Catch us if you can!