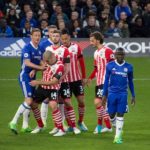 On the back of our oh so sweet FA Cup semi final victory over Spurs at Wembley, it was quickly back to the league for the re-arranged game against Southampton, our chance to extend our table topping lead, for a day at least.

It took just five minutes to take the lead, Fabregas with the long pass to Costa running into the box, and with a lay off to the unmarked Hazard as he skipped into the box unnoticed, our number 10 simply slotted the ball into the far corner of the net, very well taken, very Hazardesque.

Just the start we needed against a tricky Southampton, but we didn’t have it all our own way. We were managing to give the ball away a bit too often allowing Southampton to develop some decent possession, pushing us in front of our goal as we were pushed back into deeper positions.

And wouldn’t you just know it. The home crowd had gone decidedly quiet, like the lull before the storm, getting nervous that we weren’t able to prevent Southampton from getting closer to our goal when the inevitable equaliser came in the form of a scrappy poke over the line from former Blue Romeu after we failed to clear the ball. 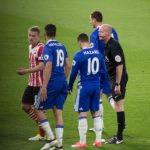 Come on Chelsea, come on Chelsea. The home fans were getting restless, singing making way for mumbling as we had to convince ourselves there was plenty of time left in this game to turn things back in our favour.

That goal had given our visitors confidence, and with nothing except pride to play for themselves, they could take chances and enjoy themselves on the ball, which they were clearly doing, especially in the corner in front of us in the West stand, where Bertrand and Boufal were running rings round us.

But when Azpilicueta made a ball chasing dash up field in a lone counter attack, it gave us the boost we needed to raise the noise levels again and get behind our boys. We finally took the game by the scruff of the neck, Kante running through their box for a shot on goal, then Alonso, and then a penalty shout as Costa hit the deck. Someone had hit the turbo boost button as we went for it, Matic responding to the now customary calls of shooooooot with a shot that was just wide.

It was end to end stuff, both teams looking like they could score or concede, and at 1-1 the game was evenly poised. But as the clock ticked over into stoppage time our sustained pressure on their goal finally reaped the reward, and what a time to do it! Our boys were dropping like flies when the corner ball came in but it was Kante who popped the loose ball back in to Alonso whose nod on toward the six yard box found Costa going for the spectacular overhead while captain Cahill coolly nodded the ball into the back of the net. What a goal, and what a relief, half time 2-1.

Second half, and we were still on a high, with no changes. We were clearly looking to make an early impact, as we often do at the start of the second half. And just a few minutes in we extended that lead with a headed goal from Costa, at last, as the announcement in the ground proclaimed it as his 50th Premier League goal. Once again, it was the Fabregas-Costa combo, a lofted ball deep into the box where Costa was lurking ready and waiting to guide the ball past defenders and keeper. 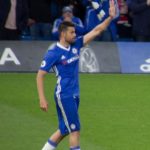 The significance of that goal lifted the crowd, Costa back scoring and the two goal cushion that would surely secure the 3 points. We’re top of the league…..

The following 15-20 minutes or so the game just felt like a kick about, we were content to move the ball around safe in the knowledge that we only needed to keep possession and keep the ball out of our goal, which we managed to do with little effort, a few half scary moments aside. But there was still plenty of time for Southampton to make us think if they got a goal back, so we had to be on our toes at the same time. An awkward part of the game, we had to be careful not to be too complacent.

As we went into the final 15 minutes of the game, Conte made our first change; the fleet footed Pedro on for Fabregas, to a standing ovation from the home fans in recognition of his goal assisting efforts.

We had a few of those scary moments following the change, Southampton with a succession of corners that needed scrambling away and dealing with. But, as ever, with the opposition distracted by their own attempts on goal, we were ready to pounce with the killer counter attack, Hazard and Kante streaking up the pitch and being chased Benny Hill style (who?) by the rest of the teams. It needed a good block from Forster in goal to stop our pocket dynamo from extending our lead.

Into the last 5 minutes and brilliant to see JT stripping off on the touch line ready for action, as his name was sung loud and clear around the ground. Moses was the man to make way, as our club captain entered the field of play to a rousing welcome. 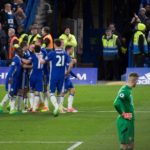 But if we thought JT was on just to shore things up at the back to prevent a late comeback by Southampton, then we made things easier when Costa scored a sublime goal, the result of playing neat little one-twos with Hazard and Pedro on the edge of the box before weaving his way through a crowd of mesmerised defenders before blasting the ball past Forster and into the back of the net. It was beautiful football, and so pleased to see our Diego finding his shooting boots again.

With the game nearly over we made our last change, Willian on for Hazard as we hailed our magnificent manager and went into 4 minutes of time added on. But what should have been a simple winding down of the clock ended up with Southampton getting a goal back, former Blue Bertrand of all people. Call me a killjoy, and I appreciate what he did for us in Munich, but applaud an opposition goal? Not for me!

Final whistle, and another important 3 points in the bag towards our title chasing goal, as we tick another game off the list. Come on you Blues!