It was always going to be an emotional day, JT’s last appearance at Stamford Bridge, his home for so many years. In many ways the game was incidental, both sides having accomplished their respective destinies, so nothing riding on the outcome except a small matter of the Golden Gloves for Thibaut Courtois and a record 30 wins out of a possible 38 in a Premier League season. We were there for the trophy presentation and the celebrations, but let the game commence.

In team news, apart from the one distinguished exception, a tried and trusted lineup were getting a final run out before our FA Cup final; Courtois in goal, protected by the phenomenal Azpilicueta, David Luiz and captain, leader, legend JT. With Moses and Alonso on the flanks, we had Kante and Fabregas holding the midfield. Up front, Willian and Hazard with Costa the target man. On the bench were Begovic, Cahill, Zouma, Matic, Chalobah, Pedro and Batshuayi.

Sunderland clearly hadn’t read the script and took the lead after just 3 minutes, Manquillo the fortunate recipient of the loose ball following a free kick that bounced off the wall and into space where he couldn’t miss. But nothing was going to spoil our party and we all felt pretty relaxed about it with plenty of time left to play.

And it wasn’t long until equilibrium was restored, a free kick that saw Alonso clatter the woodwork and following a series of side to side passing, trying to find any gap in that red and white wall, it was Willian who decided he’d had enough of the farting about and blasted the ball at keeper Pickford and through into the back of the net at his near post. Right, let’s start again…. 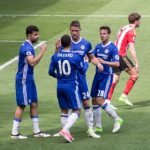 We were all over them, shooting practice and fancy football the order of the day. And JT was itching to get on the score sheet as a succession of corners and attacks on their goal involved our club captain as he looked to turn his swan song into that fairy tale ending. But it wasn’t to be this week as the inevitability of his departure finally arrived; Costa ushering (bullying) Pickford to kick the ball out of play as we approached 26 minutes on the clock.

With hugs and tears all round, JT, an ever present for so many years, so much achieved by our beloved Chelsea since he made his debut over 700 appearances ago, left the pitch through a guard of honour formed by his teammates, as the appreciative applause reverberated around the whole stadium. A moment to cherish. He was eventually substituted by Gary Cahill as the captain’s armband was ceremonially exchanged.

Back to the game, and we continued to dominate, continued to look to take the lead as we worked the ball upfield, while all the Sunderland lads could do was chase our boys around the pitch. But our Diego didn’t much like the close attentions of O’Shea (and who would) getting into a bit of a scrap that held the game up for what seemed like an age while the ref Neil Swarbrick sorted them out. Load of handbags!

A frustrating first half, we should have been in a commanding lead but we went in 1-1 at the break.

Second half and no further changes. The game really did feel like a carnival, sunshine, singing, a kick about on the grass, just waiting for the BBQ to fire up. All we needed to complete the party was a goal as reward for our utter dominance in and around their goal.

Finally, an hour played, and we took a deserved lead courtesy of Eden Hazard. A long cross field pass from Willian found Costa, who controlled the ball before passing to Hazard as they both raced into the box. But it was Hazard who decided to have a go himself as he struck a sweet shot diagonally past the keeper. His turn of pace and the weight of the final ball was a pure delight.

That prompted our second change, Batshuayi introduced in place of Costa, who was waving emphatically towards the stands that looked to many like a possible final farewell to Stamford Bridge, although he will have also been withdrawn to save him from getting a second yellow before Wembley.

Our third change saw Pedro brought on in place of goal man Hazard, and to a rousing ovation, another one to be wrapped in cotton wool until the FA Cup final.

Twenty minutes to play and we may as well have been part of an organised Footy in the Park event, it was that laid back, watching exhibition football while checking the clock waiting for the main event and finale to start. The Sunderland boys were just there to make up the numbers in this faux contest, as they just crowded out the areas in front of their goal. 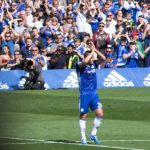 Less than 15 minutes to go and we finally breached their defences, a long ball punted upfield by our assist king Fabregas towards an alert Pedro, helped on by the hapless Lescott, our diminutive Spaniard nodded the lofted ball home.

It was effectively game over, Sunderland couldn’t give a shit, and our boys were performing for an expectant crowd waiting to see our magnificent boys crowned champions and our silverware finally handed over.

The fans were going through the Chelsea songbook to keep themselves entertained and also paying homage to Antonio, Roman and JT, as our boys in blue were killing time on the pitch waiting for this incredible season to draw to its inevitable conclusion.

But we weren’t quite finished, two more goals and both from Michy Batshuayi the icing on the cake, his second goal the last kick of the game and the last kick of our Premier League season. What a finish, let the celebrations commence and the tears roll, not forgetting that we also say goodbye to Steve Holland at the end of this glorious season.

It was a beautiful day befitting the occasion, more history being made, and I felt privileged to be part of it.