The day finally arrived, the one where the Premier League title could be sealed, our first attempt of three games available. But now was the time, to keep the winning momentum going and not let any doubt creep in. I felt excited and nervous, but pretty confident.

In the same team that started against a sorry Middlesbrough, we had Courtois in goal, with Azpilicueta, David Luiz and captain Cahill in the back three, supported by the revelationary Moses and Alonso flying up and down the wings. No start for Kante again, Fabregas and Matic getting the nod, with Pedro and Hazard providing the legs for Costa up top. On the bench were Begovic, JT, Zouma, Ake, Kante, Willian and Batshuayi.

No surprise at the home team tactics, heavy challenges, a six man defence, hand balls, and time wasting from early on, in an attempt to bring the game down to their level. And McClean was a constant source of entertainment, the nasty little sh!t! And as for that C…Brunt!

We had the majority of the possession in the first half but sometimes we had to resort to long range shots, with Fabregas and Pedro going oh so close. The opportunities for a counter attacks were limited, and although we had a couple of scary moments, they were well dealt with by our defence. Half time 0-0.

Second half and no changes, we were 45 minutes away from glory. Come on Chelsea, Come on Chelsea….. An early shot from Moses had to be tipped round the post by Foster but try as we might, little seemed to find the target, and Costa was having trouble co-ordinating his feet. It was frustrating, we had control but without making much impact, and I confess I started to feel a bit sick, despite my initial optimism, and I kept looking at the clock, the nerves had taken control of me.

And it wasn’t helped when West Brom started to come into the game and looked like they were actually trying to score a goal rather than their usual game spoiling tactics. They came so close, but a relief to see that Chadli effort skip past the post. Are you watching Tottenham….. We were losing our composure, the pressure of expectation was starting to tell. 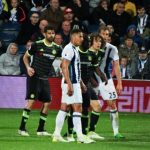 Our first substitutions came with 15 minutes left to play when Hazard was replaced by Willian, and Batshuayi came on for Pedro. Can’t say I was totally inspired by the changes, but we needed something to shake things up, we needed to keep up the tempo of the game. But, as ever, our man Conte knows what he’s doing, which is why he is paid to be a genius and us mere mortals aren’t. But the Batman didn’t have the best of starts, in his excitement at getting on the pitch he managed to foul half the West Brom side before getting a touch of the ball!

On 82 minutes our moment finally came, a concerted push forward and as Cahill sliced his shot Azpilicueta retrieved the ball and cut it square into the box allowing Batshuayi to attack the ball and bury it into the back of the net. Mayhem ensued. Limbs well and truly all over the place in the away end, grown men and women crying (me!) assorted supporters darting across the pitch as the legions of Chelsea fans revealed their whereabouts around the home stands, finding any way of being there to witness our history in the making. The sense of jubilation and relief was palpable, we really were going to do this! We’re gonna win the league…..

We spent the rest of the game celebrating, while keeping one eye on game proceedings and another on the clock, and while Zouma was brought on in place of Moses to protect that precious lead. And with 5 minutes of stoppage time, the game seemed to go on forever!

Away days don’t come much better than this. Chelsea. Champions. What a night!