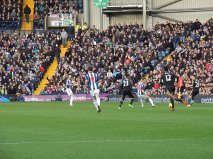 We slipped up again in the title chase with a loss against West Bromwich Albion at the Hawthorns.

The result gave the Baggies boss Steve Clarke a triumph over his former club whilst we tasted defeat again at the same ground where Andre Villas-Boas’ Blues reign ended last season.

We fielded a makeshift side with one eye firmly on Tuesday’s crucial Champions League clash away at Juventus. John Terry missing out through injury, with Juan Mata, Oscar, Ashley Cole, Ramires and Branislav Ivanovic all rested.

We started well as on seven minutes Victor Moses’ pull-back found Ryan Bertrand whose shot was cleared off the line by Liam Ridgewell, with Jonas Olsson blocking Eden Hazard’s rebound.

Then against the run of play it was West Brom who took the lead three minutes later with their first meaningful attack.

Zoltan Gera pulled the ball back to James Morrison, whose cross found Long and having evaded David Luiz he nodded in from close range.

The Baggies continued to look dangerous going forward, and on 35 minutes Long shrugged off Cahill before curling a low effort just wide of Petr Cech’s post.

It was a miss they rued four minutes later when Cesar Azpilicueta’s hanging cross was met by Hazard and his back-post header deflected off Billy Jones and past Myhill.

Sturridge and Moses both threatened as we finished the half strongly but wayward finishing ensured both sides went in level at the break.

We began the second half as we had ended the first as on 47 minutes Moses’ driving run and cross found Sturridge who tested Myhill with a fierce strike on the turn but three minutes later West Brom edged ahead again.

Shane Long curled a ball in from the right for Odemwingie, who headed his fourth Premier League goal of the season at the near post.

We pushed on and a minute later only a sliding block from Olsson denied Sturridge a simple tap-in from another dangerous Azpilicueta delivery.

Di Matteo brought on Mata and Oscar for Oriol Romeu and Fernando Torres just after the hour with Daniel Sturridge taking his preferred role as central striker.

The changes almost had the desired effect with 12 minutes left when Mata sent Sturridge clear but his strike was saved by Myhill from close range.

Four minutes from time Sturridge missed another gilt-edged chance as West Brom held on for the win.

‘It was disappointing. We found it difficult here last season and this season again,

‘We knew West Brom are very good at home and giving away goals like we did today it became difficult to win a game. Our defending was very poor, we didn’t concede many chances but with the ones we did we have to do better.

‘We had plenty of chances to score but you have to score them and you can’t always rely on three goals to win a game. You have to make sure you are focusing on your defending and are responsible to bring the points home.

‘For some unknown reason November seems to be a bad month for this club.’

‘We have been playing a little bit different this season and we might have to go a little bit back to win games, to make sure we don’t concede and still have good combinations to score goals.