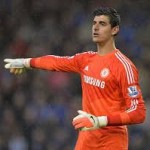 Eden Hazard skilfully slotted home his fourth penalty of the season as Martin Atkinson showed that he was not afraid to award the Blues a deserved spot kick. Regrettably thereafter, the away team went into their shell, and for the first half hour of the second half, the visitors were under siege from a Liverpoo team that is a big improvement on the one which limped out of the Champions League before Christmas.

Unfortunately, there are still too many sheep in the Chelsea camp who will label Mourinho as a tactical genius for coming away from Shamfield with a score draw. However, were it not for the goalkeeping heroics of big Courtois, then Liverfools would easily and yes deservedly have won. Chelsea offered very little going forward. The dangerous Costa was stifled by the home team’s back three of Can, Sakho, and Skrtel as Chelsea rarely troubled Mignolet. Of course, you reap what you sow, and Mourinho’s insistence upon playing Mikel on such occasions clearly detracts from our attacking potential. Perhaps Monsieur Wenger is correct when he states that Jose is afraid to lose.

It’s all very well being desperately keen to avoid defeat, but if a determination to avoid conceding goals then paralyses our chances of scoring any ourselves, then the best that we can hope for is a stalemate. In truth, Chelsea cannot always expect to soak up pressure and mug their opponents twice on the break as we famously did last April at Shamfield. Similarly, the Londonders dare not get too smug about the away draw. We did after all draw at Atletico Madrid before succumbing to them at home. It is also worth pointing out that the away goal is of little importance. Away goals don’t kick in on the second leg until extra time. Therefore, if Chelsea have aspirations of winning on the away goals rule, we must draw 0-0 in 120 minutes at the Bridge. Can you imagine the nerves and coronaries if our team clings on to 0-0 in the extra half hour, like a boxer clinging to his opponent in order to avoid any more punches?

Therefore, before the Blues contingent congratulate themselves on a draw at Ann’s field, the sober reality is that Chelsea must now win the return leg. That could be easier said than done. Brenda Rodgers has predicted that Liverpoor will thrive at the Bridge if we actually play more attacking football, and Heaven knows we should. Ultimately, although the Scousers are dangerous on the break, the west Londoners must back their own instincts. We are a better team than them, as our league positions clearly demonstrate. Therefore, why does JM persist in paying them far too much respect and instructing his team to retreat into their defensive cave. Inviting Liverpoofs onto us is a recipe for disaster. They may be a little toothless up front at present, but they only have to get lucky once [or twice] and Chelsea could be heading for a cup exit.

Certainly, on the evidence of last night, it seemed that the hosts were the team leading the Premiership by five points and the visitors were the team trailing in eighth position. Furthermore, I reckon that this contest serves as a rehearsal for our away leg in Paris in February, and although 1-1 would be a great result there, the bus-parking away from home in the latter stages of the Champions League is not the path to glory. It’s a desperate ploy from a manager who has limited faith in his team’s attacking potential against the biggest and best clubs. Reverting to backs-to-the-wall defending is not the way forward. This Chelsea team is way too good for such awful, cagey tactics.

Another Lovely Massacre Of Tottensham (by Gary Watton)