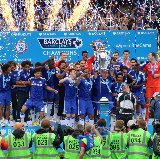 Having been in celebratory mood for some weeks, there was the small matter of fulfilling our fixture list, and it was the Mackems who came to witness the party and afford us our third guard of honour, welcomed on to the pitch by a fantastic display of Chelsea legends from the Matthew Harding, adding to those legends from our Premier League winning team 10 years previously who were earlier presented on pitch.

The day was also tinged with sadness as we learned that legend, and captain for the day, Didier Drogba would be leaving us to continue playing for a further year, and we also expect to see Chelsea’s no 1 Petr Cech move on. So, starts for both. 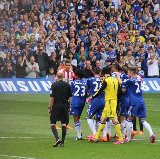 A confident start for the champions, nice to see Juan Cuadrado finding some time on the ball. But against the run of play, the visitors took the lead on 25 minutes when a corner ball skipped past our defence and was headed past Petr Cech by Fletcher.

And in immediate response Jose brought on Diego Costa for that man Drogba, who received a standing ovation by fans and players of both sides, while he was hoisted aloft and regally carried off the pitch by his teammates. A fitting tribute. 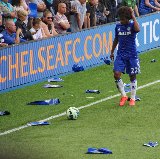 Just 10 minutes later, on a probing run into the box, Cuadrado was fouled by the cynical O’Shea, the resulting penalty comfortably converted by Diego Costa, bringing his League total to 20. Just before half time Cuadrado was replaced by Loic Remy. HT 1-1.

A bright start to the second half, we dominated play and possession, and were rewarded on 70 minutes when a mazy run towards goal by Eden Hazard found Loic Remy on the edge of the box who turned and fired the ball into the bottom corner.

With 15 minutes left to play Andreas Christensen came on for Mikel. Meanwhile, the paper planes created as a by product of the Matthew Harding display were playing havoc with attempts at passing in the box, and attempts by players and officials to remove them were futile. But with just a few minutes left on the clock, a beautifully weighted pass from Matic behind Sunderland’s defence found Remy lurking ready to slot home.

A comfortable win to end our exceptional campaign, top of the league from all but day one, the Premier League crown was well and truly earned and deserved. Let’s have that trophy now….