Anyone would think we had won the league!

We expected our youngsters to feature heavily, but Jose went with some of our big guns including the return of Diego Costa with Loic Remy on the right, while retaining Rubén Loftus-Cheek. On the bench Nathan Ake and Izzy Brown.

A bright and pretty even start to the game, it came as a bit of a shock when West Brom took the lead after 8 minutes when Berahino fired an unstoppable shot past Courtois. Undettered, we continued to push forward feeling confident that the equaliser would come. 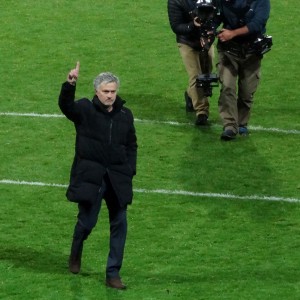 The first away trip since being crowned Premier League champions, the traveling support were in great voice and we had plenty to sing for as we pushed up the pitch. With little more than 25 minutes played a six of one, half a dozen of the other tussle in the box between Costa and McAuley led to our boy getting booked. And while all this was going on the bored of waiting Fabregas was involved in a bit of passing practice using Brunt’s head as a target. Never a red card, the shot was spot on!

Down by one man, but still in contention, we’ve seen many a 10-man team galvanise and go on to win. HT 1-0.

Within one minute of the restart West Brom were awarded a penalty when JT fouled Berahino in the box with a mis-timed tackle. Our big Belgian managed to get a hand to the ball but not enough to stop the goal.

Still everything to play for and with some good possession going forward, the traveling fans continued to sing their support for the team. But apart from a curling shot off the post by Remy, we were finding it difficult to make our possession count, perhaps just missing the creative through ball that Fabregas can offer. Costa continued to be the pantomime villain, booed by the home fans at every opportunity.

With half an hour left on the clock a West Brom corner found the supposedly semi conscious Brunt at the edge of the box where he fired a low shot past Courtois at his near post. The Baggies now 3 up. But with the title already secured, the Chelsea fans continued to sing as Costa was replaced by Juan Cuadrado.

To the resonating sounds of We’ve won the League, and our dominance with the ball, we were unable to penetrate West Brom’s defence. But we all know that possession doesn’t win games! On 72 minutes Rubén Loftus-Cheek was replaced by Nathan Ake followed a few minutes later by Remy being replaced by Izzy Brown, to the ungracious boos of the home fans.

Full time, and although our worst defeat of the season we were well and truly in celebratory mood as Jose walked across the pitch to show his appreciation to the unshakeable spirit of the traveling fans, still singing their hearts out. A clip can be seen here.

A great away trip, one to be remembered for the unending support of the away fans, who were rightly deemed Man of the Match by many, including Pat Nevin in his blog.

Next up, the Premier League trophy comes home to Stamford Bridge as our last game of season sees us against Sunderland next Sunday.