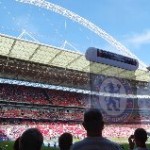 Another trip to Wembley, this time to renew the growing rivalry with the red side of north London, as we competed for the annual season opener, the Community Shield. Also the first time we have seen St Petr the Saviour play against us, but good to hear the appreciative applause for him, which is more than can be said for the reception Cesc Fabregas received from his former devotees! No Costa in the lineup or on the bench, a precaution to rest his fragile hamstring, Remy starting up front. New boys Radamel Falcao and Asmir Begovic along with Oscar, Zouma and the returning Victor Moses among the substitutes, with many of the usual suspects getting the nod. 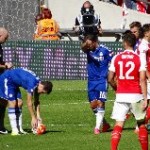 The Gooners were quick out of the blocks but the game soon settled down into pretty even and lively contest, the rivalry clearly on show as Fabregas was clattered a few times. However, just before the half hour, Oxlade-Chamberlain muscled past Azpi to fire an unstoppable shot into the top left corner of the goal. We were quick to respond, Willian looking his usual lively self and Ramires with a couple of good chances, the second of which a free header that on another day would have, and should have, been buried. HT 1-0. 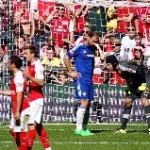 The start of the second half saw the introduction of Falcao, replacing Loic Remy up front. Ten minutes later, Ramires was replaced by Oscar. A positive start to the half, Falcao looking confident on the ball as we looked to find an equaliser, Hazard’s shot over the bar the closest. A foul on Eden Hazard just outside the Arsenal box led to a free kick aimed at the top left corner by Oscar, but easy for Cech the Almighty to push behind for a corner, which in turn led to nothing more than a goalmouth flap by the Arsenal hero. Meanwhile Kurt Zouma came on to replace Azpi, who himself had a headed chance saved by their Knight in the Shining Helmet. 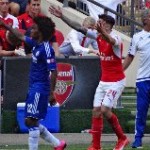 Both teams had their chances, but as we entered the final 20 minutes of the game, we upped the pressure as Wenger’s boys lined up behind the ball in an ironic red bus like attempt to hold on to their slender lead. And with just under 10 minutes left on the clock, JT made way for Victor Moses as we looked to find the back of the net.

As we approached full time the temperature was rising both on an off the pitch as the blue half of the crowd were willing our boys on and as Falcao and Arteta had to be pulled apart by the ref following a foul by Gibbs on Matic. Sadly the resulting free kick couldn’t be converted and with that went our last chance.

Not the sharpest performance from us, perhaps suffering from post tour jet lag, some key players seemingly more affected than others. But with one last friendly game before the start of the serious stuff in the Premier League next weekend, some final preparation should see us ready to hit the ground running in defence of our title. Bring it on!