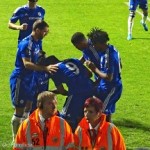 The start of the defence of our Capital One Cup saw us drawn against League 1 Walsall, one of a number of clubs in the Birmingham area, this one making the traveling support very welcome allowing us use of their on site supporter’s club, Saddlers. Rumours of a preference to stay there and watch the live episode of Coronation Street are totally unfounded!

Back to the game, a few changes as expected, JT returning alongside Gary Cahill, with Ivanovic and Rahman either side. With the safe feet of Mikel were lively youngsters Loftus-Cheek and Kenedy, supported by Ramires and Remy, with Falcao up top. Substitutes were Pedro, Matic, Hazard, Blackman, Aina, Traore and newest signing Papy Djilobodji.

In truth, it was pretty one sided from the start and when Kenedy found himself in possession in their half after 10 minutes, a perfectly weighted cross found Ramires waiting to nod the ball home. And had it not been for some last ditch defending by the home team we could have been cruising by half time. But that second goal did eventually come not long before the break when Loic Remy fired the ball into the roof of the net.

But in a fleeting moment of hope for the grateful and jubilant home team, a free kick given away by Ivanovic, getting involved in a needless tussle, eventually led to their goal after the initial shot had been stopped by Begovic. HT 1-2.

Second half, we continued to show our difference in class, and within a few minutes new boy Kenedy was on the score sheet when a super pass from Loftus-Cheek into his path allowed him to fire the ball past the keeper. He seemed pleased with his effort as he celebrated in front of the joyous away fans.

And in the comedy moment of the night one of the sprinklers had fired up like a pop up water feature, and to the hilarious sounds of You’ve Had Your Shower Now F**k Off Home, an emergency plumber was eventually found to turn the stopcock off.

With 20 minutes to play, Kenedy was replaced by Pedro and shortly after Matic came on for Loftus-Cheek. We probably allowed Walsall to have too much of the ball but we were never in any danger of conceding despite their spell of possession.

And just when we thought it was all over, an easy shot by Pedro just outside the penalty box found the bottom corner of the goal to make the final score 1-4. A late substitution saw Falcao replaced by our new Senegalese defender Djilobodji, who barely had enough time to touch the ball.

A stroll of a game really, but made interesting by the excellent performances from the young lads, Kenedy and Loftus-Cheek especially. I thought Ramires had a decent game too, but it was a good all round team display. If there were any negatives, Falcao had a game to forget, his touch eluding him as well as a a couple of shots resembling rugby conversions!

But we march on, next stop a trip to the delightful Stoke. Alas, someone had to….