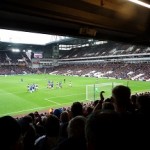 On the back of a positive performance in Europe and a couple of clean sheets, we made our final visit to the Boleyn Ground to meet a rejuvenated West Ham. And to acknowledge that performance last time out, Jose went with the same starting eleven. On the bench were new keeper Marco Amelia, Baba Rahman, Loftus-Cheek, Traore, Mikel, Oscar and Falcao.

A feisty but pretty even start to the game, as is often the case with this fixture. After a quarter of an hour a free kick tipped over the bar by Begovic led to a corner, initially cleared but only as far as Zarate on the edge of the box and unstoppably fired through our defence.

And in the first of a number of contentious incidents, a Fabregas corner found the leaping Zouma’s head, who nodded the ball towards the goal line, but just a gnat’s member short of fully crossing the line before being cleared. But while we were still rueing our misfortune, they had picked up the cleared ball on the break when Matic was adjudged to have fouled Zarate as he teared down the pitch. Still with the ball, the home side nearly doubled their lead but Begovic did enough to put Lanzini off. 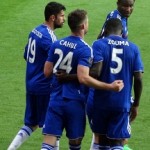 But the faux Cockneys didn’t have it all their own way, a break from the streaking Willian found Fabregas who fired a great shot into the bottom corner, only for it to be ruled offside. My arms were in the air celebrating before I realised that it was all in vain. Things definitely weren’t going our way and to add insult to injury, Matic found himself sent off following a challenge that could certainly have been interpreted as a foul but whether it warranted the second yellow card is debatable. Clearly incensed at the injustice, half the team were booked as referee Jon Moss (not formerly of Culture Club) totally lost the plot. And in the furore, the away crowd made their feelings known by continuing to boo the officials up to and at half time, while Chelsea coach Silvino Louro was also sent off. What a farce, and one nil down at half time.

At the start of the second half Mikel was brought on for Fabregas who, apart from his offside goal, wasn’t having the best of times. And something clearly wasn’t right on the bench, as Steve Holland and Rui Faria appeared to be controlling pitch side matters with Jose nowhere to be seen. We later learned that he had been sent to the stands along with Louro, apparently also making his displeasure known to the referee. 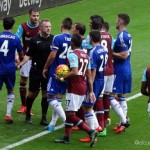 So back to the pitch, and within 10 minutes we were level. Both Zouma and Cahill rising for a Willian corner, with Cahill getting on the end of the ball as it dropped, firing home from close range. And we deserved it, not giving up with a man down. And as is often the case with 10 men, we were holding our nerve, a point would be a good outcome given everything that had gone on. We could have even snatched the lead, a golden opportunity came from a quick kick out from Begovic, which found the advancing Hazard sprinting towards goal, a short pass laid on for Ramires for a simple shot on goal that he managed to balls up. What a chance wasted!

But straight up the other end again, and a high cross towards lady boy Carroll to head over our defence for a goal. Cue delirious scenes, as the pikeys celebrated like they had won the Milk Cup, because actually they don’t beat us very often. Bless! 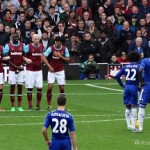 Towards the end of the game Ramires was replaced by Falcao, shortly followed by Rahman on for Azpilicueta. But ultimately it was in vain as the game ended 2-1. Once again Willian the stand out performer for us, his energy and his willingness to fight to the end, and at one point urging his teammates forward, sadly unheeded.

They do say that when you’re down nothing goes your way and it certainly felt like that. And with Jose choosing not to speak with the media after the game, and personally I don’t blame him after the goading he has endured all week, we wait once again, for that knock on the door from the FA.

Maybe a trip to Stoke on a wet Tuesday night will be just the distraction we need. Funny you should say that…..

Supporter Advisors To The Board Selected