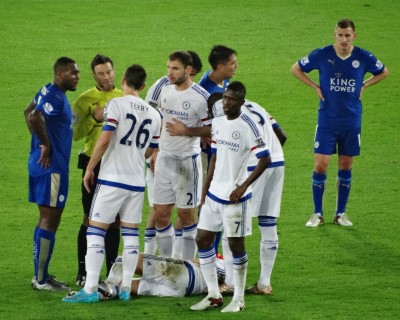 Another outing for the disco car, heading to Leicester and taking in the local culinary delicacies once we had arrived. A local curry house and a stroll to the ground to work some of it off!

After our resounding victory in our Champions League game a few days earlier, we should be on a high and in a positive mindset to finally kick start our Premier League season. The team lineup saw Courtois in goal with Ivanovic, Zouma, JT and Azpilicueta lining up in front of goal. With Ramires and Matic in defensive midfield positions, it was the usual suspects of Willian, Oscar and Hazard in the attacking roles, with Costa up front. On the bench, Begovic, Cahill, Mikel, Kenedy, Fabregas, Pedro and Remy.

With the Leicester grounds man demonstrating a sense of humour with his mowing skills and the home fans causing headaches with the noisy ‘clacker’ things (remember Chelsea giving those away once?) and that blasted w*nker with the drum, the game got underway.

A frenetic first few minutes of the game, both sides guilty of giving the ball away as it was knocked around the park, and pretty clear that Costa was being targeted for special treatment, from both the home players and their quaint fans. 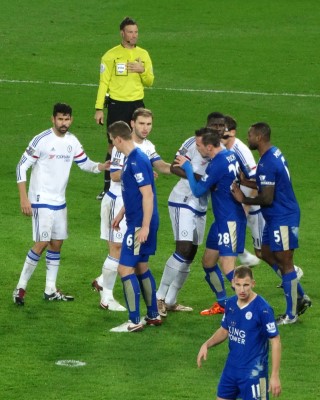 Our first chance on goal came on the quarter hour when a foul on Hazard led to a Willian free kick, with it always the prospect of a spectacular goal. It sadly came to nothing though, the ball getting no further than the first defender. But although there were no real chances on goal at either end, it was Leicester who were starting the test our keeper.

Just before the half hour a fairly innocuous challenge by Vardy on Hazard had our number 10 landing awkwardly on his hip. But later replays would show there might have been a sneaky raised foot by Ulloa that actually tripped our man over. But the upshot being that Hazard was reluctantly replaced by Pedro. Or was that a reluctant Hazard?

But just a few minutes later we were a goal behind, that weasel on speed Vardy having sneaked behind JT and in front of the half asleep Zouma, picking up a cross from Mahrez in front of goal, which was easily slotted past Courtois. But a couple of minutes later we could have equalised when Matic’s header from a corner ball flew narrowly over the crossbar.

But as we approached half time we looked like a team that didn’t want to be on the pitch, their minds seemingly already on the team bus home. HT 1-0.

The second half started off with a nasty challenge by the weasel on Costa, sliding in and taking him out from behind. Needless to say, the fiery one didn’t laugh it off with a friendly handshake!

But worst to come, our sloppy passing led to a counter attack which found Albrighton crossing the ball from one side of the penalty box to the other, to the feet of Mahraz who jinked and danced in front of Azpilicueta before lofting the ball past him and Courtois. Too easy, and we looked clueless.

We were rocked, all over the place, farcical at times, and something had to change. That change came in the shape of Fabregas, on for JT. But the away fans remained in good voice, continuing to support our Jose and the boys in the main, although I did shake my head in disappointment at the sound of some of our number joining in with the You Are Shit chants from the home fans. Not what we need in my view.

As the minutes went past we finally began to settle down and some half decent movement on the ball gave some hope, at least, of a fight back. Chances by Pedro, Ivanovic and Costa where they perhaps should have done better.

With 25 minutes left to play our final change saw Remy on for Oscar, and now our chance to make inroads and change our emphasis from defence to attack. And after scuffing one chance, Remy was on hand to pull a goal back. A lovely cross from Pedro tearing down the wing found the head of Remy fast approaching the goal to simply nod past Schmeichel. Game on. Finally. 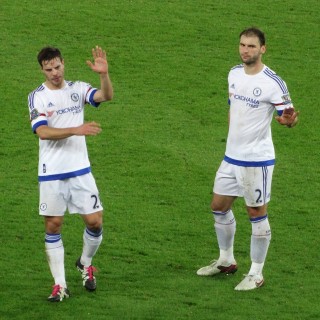 The away fans continued to make their voices heard, despite the news of extensive delays on the home bound M1, much to the delight of the clacker wielding provincials. I’d expect nothing less!

Into the last 10 minutes of the game and while we were pushing for that equaliser Leicester also had their chances. But in the end it was too little too late and the game ended in another disappointing defeat, not able to sufficiently recover from the lacklustre performance earlier in the game.

The final whistle, and a dismal night for everybody concerned, players, manager and fans alike. But there is absolutely no excuse for our boys to slope off down the tunnel and totally disregard the away fans who travel and support our team across the country (and beyond) through thick and thin. Disappointingly, only Ivanovic, Azpilicueta and Courtois managed to haul their lazy arses in our direction, and those three were rightly applauded for doing so.

A sombre mood on the way home, having to detour away from the motorway hold ups. But once the funky tunes kicked in we drifted off to the disco dance floor, for a short while at least.

A wise man once said, why let a bad game of football get in the way of a good day out!

Why Villas-Boas Is The Right Man For Chelsea