In the pouring rain the Chelsea faithful trudged their way, via one of the snug local hostelries, to that small team in Croydon for our first fixture of 2016. And on the back of a three game unbeaten run since the departure of Jose, could Guus grind out a result against our upstart south London neighbours, another one of a handful of ‘small’ teams finding form in the first half of the season?

A familiar starting lineup; Courtois in goal with Azpilicueta, Zouma, JT and Ivanovic across the back. With Mikel and Fabregas were Oscar, Hazard and Willian, with Costa up front, back from his one match suspension. On the bench Begovic, Baba Rahman, Loftus-Cheek, Matic, Traore, Ramires and Pedro.

With the ball zipping about on the slippery wet pitch both teams were passing the ball around sharply, the odd wayward shot, but neither taking control of proceedings. But after 10 minutes we started to pick things up a bit but sadly for Eden Hazard he picked up an injury and was soon replaced by Pedro. Lively end to end stuff, some healthy challenges going in, some better timed than others!

The home team were getting more of the ball as the half wore on, with a succession of corners and free kicks, but we had it all covered, the boys at the back more than a match with Zouma putting in a timely boot where needed.

Thankfully the slip sliding deadlock was broken just on the half hour, a great through ball from Fabregas that found Costa on the edge of the penalty box and as the defender missed the interception he took the ball goalwards where Oscar was tearing down the centre unmarked. A clever short cut-back pass allowed him a simple tap in. A great move from our boys, perhaps against the run of play, but hey ho! 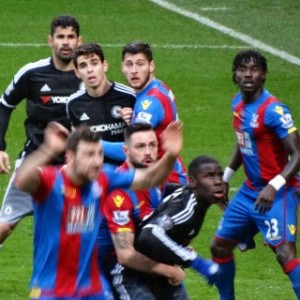 An untidy rest of the half, the conditions not exactly conducive to exhibition style football, but entertaining nonetheless, and all that rain must have been playing havoc with Willian’s hair! But with the away fans singing through that infernal drumming from the Palace boys brigade the half ended with us on a 1-0 lead.

Second half and after a quick rub down, some renewed hair product and a change of kit, and as the rain subsided, we began to take charge of the game, coming close to a second goal when Zouma’s header narrowly skipped over the cross bar from Willian’s free kick. Some fancy footwork from our boys now, with the Chelsea fans paying particular vocal homage to John Obi Mikel, having a solid game in the middle of the park.

On 60 minutes that second goal finally came. An interchange of quality passing between Willian, Fabregas and Oscar, eventually finding the hirsute one just outside the box, and didn’t he let an unstoppable shot fly into the top corner of the net! What a goal, and nice to see the Drogba-esque celebration from him.

Much, much better from our boys, and it was Willian again some 5 minutes later who made a probing run into the box, his low shot on goal tipped away by the keeper but only as far as Costa who was lurking on the edge of the 6 yard box ready to tap in the rebound. That’s what goal poachers do, and good to see Costa in the mood again.

And to the cries of Chelsea Are Back, the rain, the wind and the cold, draughty excuse of a football ground was all but forgotten as we relished our team’s performance, one that hasn’t been seen for some time.

And it was exhibition stuff for much of the remainder of the game, as we passed the ball around with confidence, not allowing Palace space to play. All Chelsea now and good to see our boys looking for a possible fourth. In the dying minutes of the game Oscar was replaced by Matic, as the final whistle came and went.

A fantastic team performance and result, 3 great goals and a clean sheet, I really hope this is the start of a happy new year for us.

Southampton Away – View From In Front Of My Screen