I love the FA Cup, and I love being part of a massive Chelsea away crowd, around 7,000 fans travelled to Stadium:MK. A half decent stadium, but located a fair way from local stations and in the middle of a network of roundabouts, megastores and chain restaurants. Wet, miserable and bleak. On top of that I remain appalled at the way franchised MK Dons were allowed to steal Wimbledon’s football club away from them while the fans left behind had to start from scratch, the way MK Dons should have gone about setting up their own football club. But that’s just my personal view.

A positive starting lineup with Courtois retained in goal and Ivanovic, Cahill, JT and Baba Rahman across the back. A welcome start for Ruben Loftus-Cheek, pairing up with Matic in front of the back four, with Hazard, Fabregas and Oscar supporting Diego Costa up top. On the bench Begovic, Zouma, Azpilicueta, Mikel, Pedro, Willian and Traore.

A high tempo start to the game, but the difference in quality between the two teams was pretty evident from the off and a very early chance for Costa to put us one up was denied by their keeper when he got in front of a close range shot. We were working the ball well, very much aided by the home team giving the ball away and allowing us so much space. Superb movement and chances on goal from our boys, only a matter of time before that ball hit the back of the net. 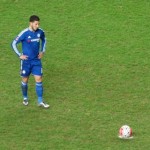 And after 15 minutes came our first goal, the ball given away allowing Costa to take it into the box, laying off a short pass for the oncoming Oscar to divert into the goal. It was no more than we deserved. To the cries of Ole Ole Ole Ole Chelsea Chelsea, we continued to create wave after wave of chances.

But inevitably, and totally against the run of play, the home side equalised when a rare shot on goal from Potter clipped the heel of Matic causing the ball to loop over the outstretched arm of Courtois and into the top corner of the goal. I suppose it’s good to give the locals something small to cheer about, there can’t be much else to be happy about living in Milton Keynes!

But if the home side thought they could capitalise on their good fortune they were sadly mistaken as we continued to exploit the gaping holes across the park and ease our way towards goal. But Martin, the MK Dons keeper, did well to prevent Hazard scoring from a one on one. And if we thought that was a golden opportunity lost, a minute later a probing cross in front of goal by Baba Rahman had both Costa and Oscar sticking a leg out but neither managed to get the ball into the goal, Costa in fact managing to divert the ball away from Oscar’s path. This game could have been dead and buried already at this stage if our chances had been taken.

It’s fair to say that the home team looked all over the place, allowing us to run through them unchallenged, and when Loftus-Cheek played Oscar through on goal he didn’t miss this time, firing a sweet strike past the keeper and into the left hand side of the goal. 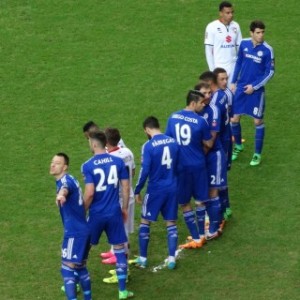 Approaching half time and MK Dons did manage to engineer a shot on goal which narrowly missed the crossbar, but we continued to dominate, so good to see us moving the ball forward with one touch pace and with Oscar seeing another shot on goal roll just past the post.

But just before the half time whistle Oscar finally got his well deserved hat-trick with a fabulous strike into the top corner of the goal after being allowed to travel with the ball along the edge of the box and simply picking his spot. Poor from MK Dons, brilliant from Oscar. HT 1-3.

Second half, no need for changes, and an evenly fought first few minutes but with just under 10 minutes played we were awarded a penalty when Hazard was fouled as he brought the ball into the penalty area. And with Hazard taking the spot kick himself, it was an easy take as he rolled the ball into the back of the net as the keeper went the wrong way. Cheers all round, and the fans’ appreciation reciprocated as Hazard turned and thanked the fans for their support, with a little prompting from JT!

A couple of minutes later our first substitution, Bertrand Traore on for Diego Costa. We continued to stroke the ball around, the home team just standing there watching us play around them. And just as MK Dons had a brief glimpse of what it’s like to play in front of our goal for a change, a ball out and a signature superbly weighted long ball from Fabregas was played to the breaking Hazard and with all the space in the world he rolled the ball into the path of the oncoming Traore who, with one touch, found the bottom corner of the net. What a superbly taken goal and great vision from Fabregas.

Still a good half hour to play, and a double substitution, Oscar and Hazard replaced by Willian and Pedro. Content to just move the ball around now, the game was won, and a succession of Willian free kicks, from fouls on Loftus-Cheek and Baba Rahman on the edge of the box, came to nothing.

The away fans were in good voice throughout the game, continuing to the final whistle. And fair play to the home fans too, they may have been quiet but they stayed to the end, no doubt in awe of our style but, let’s face it, they’re only there for the Chelsea!

Job done, and a great performance on the night from the boys in blue, but it has to be said that MK Dons were woeful, the space they allowed us contributing to our superb display, but we can only play the team that sets up against us on the pitch. And thankfully no giant killing for the media to gloat about. Yes, looking at you BBC!

So, the trudge back to Bletchley Station where we heard the news that our next opponent will be Manchester City at home. And with standing room only on the train back to London it was there that the news that overshadowed the whole evening’s events broke, that JT is to leave Chelsea at the end of the season. What a gutting end to a fabulous game!

Bolton Home In The Carling Cup