A second trip in a week just north of London, this time back to the Premier League and stopping off at Watford, an area personified by a high street offering its undemanding locals the delights of a Costcutter and an XFC fried chicken shop. So, with a quick drink via the aptly named designated away pub the Oddfellows, we walked the short distance to Vicarage Road.

The team lineup consisted of Courtois in goal, with Ivanovic, Zouma, JT and Azpilicueta across the back. Matic and Mikel once again pairing up in front of the back four, with Fabregas sitting behind the creative midfield of Oscar and Willian, Costa taking his usual position as lone striker. Substitutes were Begovic, Cahill, Rahman, Loftus-Cheek, Kenedy, Traore and Hazard.

As the teams walked out to the Goodison-esque theme tune from Z-Cars (one for the teenagers to look up) and the flag waving home fans, the away fans demonstrated their feelings about last weekend’s announcement concerning JT’s contract situation, and the unthinkable prospect of him leaving at the end of this season. Chants in support of our captain, leader and legend were a theme throughout the game.

It’s fair to say that while we had a fair proportion of the early play, it was pretty scrappy with very little by way of attacking chances created. And when we did have a promising move after 10 minutes the fiery one and the defender were engaged in some handbags inside the box, which had the ref Mike Dean halting the play and having words. With Costa suitably wound up like a coiled spring and the home fans establishing their pantomime villain, it was only a matter of time before matters got out of hand. 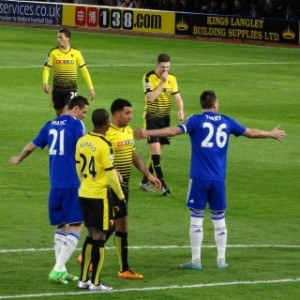 The game continued in the scrappy way it started, neither team making inroads. The first real glimmer of a proper chance for either side fell to Watford on 25 minutes when Ighalo totally misjudged a decent cross into the 6 yard box. But if they didn’t score, it certainly gave the home team some confidence, with a succession of attacks, culminating in a top save required from Courtois from Capoue. Unfortunately, it also set the w*nker with the drum off!

With 30 minutes played a long ball from Oscar over the top of the defenders found Costa heading for goal, he steadied himself and his shot on goal narrowly missed the far post having taken a nick off the defender on the way for a corner. Sadly the corner came to nothing but we did manage to keep the ball around their box for some time, still looking for that opening.

But we just weren’t positive enough, lacking that decisive quick passing play that was so effective last weekend. But clearly Watford are a different prospect to MK Dons, looking to close us down whenever we got anywhere near the final third.

While very little was happening for us on the pitch, as we approached half time the away section were in good voice as we paid vocal homage to Frankie Lampard all the way up to the break. It was a freezing cold night and we had to keep ourselves entertained somehow! 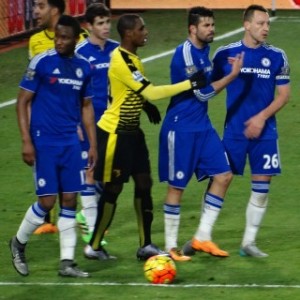 However, our celebrations of a Chelsea legend were rudely interrupted by shenanigans on the pitch, when Costa and Paredes were involved in another bout of handbags, the guy in yellow resorting to rolling around a few times and clutching his face in front of the 4th official, trying to make a point and trying to get Costa sent off. And let’s be clear, Costa went nowhere near his face. Daft really, and yellow cards for both. HT 0-0.

Second half and with no changes and playing towards the away fans we started quite brightly with successive shots from Oscar and Mikel blocked, the latter’s effort given a helping hand over the crossbar by Gomes as the ball looped towards goal. Mikel seemed amused by his effort, as were the travelling contingent.

A golden opportunity to take the lead came 10 minutes after the restart when Matic played a through ball to Costa who took the ball to the side of the 6 yard box, only for Oscar to collect and side foot the ball out of play from close range. And 5 minutes later another chance when Matic picked up a rebounded ball and fired at goal on the volley. But easy for Gomes, who was starting to be worked.

Much better possession so far in the second half, but concerned that our few chances were coming from Watford errors rather than worked from our own quality efforts, still far too scrappy.

With just under 20 minutes left to play a much needed change and injection of creativity when Matic was replaced by Eden Hazard, to the resounding cheers of the away fans. And we should have taken the lead shortly after, when a ball played by Willian to Hazard was pulled back for Ivanovic to side foot straight at the keeper. We really ought to be putting those away, but the keeper did well. And we really should have done better when Willian played a ball across the penalty box to Hazard, whose heavy touch allowed Gomes to come out in a two way race for the ball to safely smother it.

Hazard certainly made an impact when he came on and you always expect something to happen when he gets hold of the ball and runs with it, but the decisive edge just seemed to be missing as the chances created seemed to fizzle out. And another golden chance went begging when Hazard collected a ball from JT at the edge of the box as he barged his way into the box looking for the return. But when the cross came in all Costa could do was put the ball into the side netting.

The best chance of the game came when a short corner was eventually crossed into the box to Costa, but Gomes blocked his header at practically point blank range, wrapping himself around the goal post into the bargain.

The final whistle and a case of too little too late for us, far too defensive and slow to the ball first half, unable to string passes together. Better in the second but could have done with some of the other subs being used as well, and at an earlier stage, to change the dynamics and pace of the team. Still unbeaten under Guus Hiddink, but with so many draws we aren’t making any real progress. I came away from the game feeling very disappointed in a pretty poor performance overall, we just looked so lacklustre.

And talking of lacklustre, our next game is at home to Manchester Utd, armed with issues of their own, but always an epic fixture to look forward to.