So the evening finally arrived, a big European night that could have a huge influence on the rest of our season, and we came into the game with that all important away goal despite being the one goal behind at the half way stage of the tie.

A strong starting lineup had Courtois in goal with Azpilicueta, Cahill, captain Ivanovic and Kenedy across the back and Mikel and Fabregas sitting in front. Attacking options were Pedro, Willian and Hazard with Costa, as expected, returning up front. On the bench were Begovic, Baba Rahman, Loftus-Cheek, Matic, Oscar, Remy and Traore.

With the tension building nicely, the teams emerged into the darkness and the now customary dimmed lights accompanied by the noise of the pulsating heartbeat. And with the Champions League banner on display in the Shed and a great atmosphere, the game finally kicked off.

It was a competitive start to the game, Costa getting the first strike on goal, requiring a save from the PSG keeper Trapp. But a couple of minutes later Ivanovic was required to divert a ball off the line from Di Maria, after his effort went past Courtois. And danger signs from the resulting corner too, although Ibrahimovic’s eventual ball into the back of the net was rightly called offside. 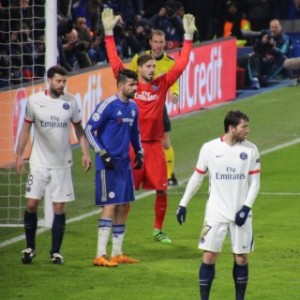 As the match progressed it seemed clear the game was going to be a midfield battle, the ball being knocked around with our boys terrier-like in pressurising and hassling the opposition in an attempt to break up their play. It was a lively start and some strong challenges going in on both sides.

But our early hard work was undone on 15 minutes when Ibrahimovic was able to put a good ball in across the face of the goal, for an unchallenged Rabiot to simply slide the ball into the back of the net. A crushing blow, met with silence from the disappointed home crowd.

That goal certainly gave our Parisian visitors confidence, now stroking the ball around with purpose, while we took time to regain our composure. But as we slowly got back into the swing of things the Chelsea faithful got behind our team again, in good voice on such a big occasion.

As we approached the half hour we got ourselves back on track, the hyperactive Pedro stealing back possession and laying the ball off to Willian as they raced forward, and a final ball to the de-masked Costa Le Fraud as he shimmied past the PSG defence and fired the ball home. Cue delirious scenes in the home stands and our players looking like they were well up for a fight. Diego, Diego – game on!

The game really came to life now, fast and furious end to end stuff, tackles flying in everywhere, decent attempts on goal from Fabregas and Hazard and we were really pushing for that second goal. But their defence held out to half time, our boys on a high, and scores on the night remaining at 1-1.

Second half and no changes to our personnel on the pitch. We started the half brightly enough, Willian streaking down the left side, being chased all the way by Rabiot, before running behind the man in white to pass back to Costa, only for his shot to be blocked.

Still a very feisty affair, some good challenges being made in a highly charged game, so much at stake for both teams. And we were creating plenty of opportunities to draw the tie level. While the scores remained within touching distance the crowd were in good voice, spurring our boys on to continue with the positive work on the pitch.

However, that was all to change when, with 30 minutes left to play, Diego Costa went off injured. He was replaced by Bertrand Traore, himself having a good run of form with his limited opportunities in the team.

But we continued to push on, Hazard and Willian both having shots on goal blocked by Trapp in a succession of decent attempts. But slightly against the run of play PSG produced the killer blow when Di Maria put a fabulous cross into the box and into the path of the fast approaching Ibrahimovic, splitting our defence apart, and with a one touch volley into the roof of the net. 2-1 down on the night, 4-2 down in the tie, we had a mountain to climb and 3 goals to get in just over 20 minutes.

While the PSG fans finally sprung into life, the home fans were utterly deflated – get one goal back though and you never know what might happen, but with our most likely scorer Costa off the pitch, it was always going to be an uphill battle. 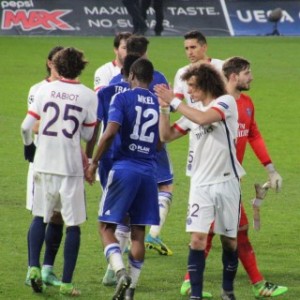 But we didn’t get that quick goal, and we never really looked like getting it, we just didn’t appear to have the will to even try. With 15 minutes left to play Oscar came on to replace Eden Hazard, who had been struggling for most of the second half, and who looked in real discomfort as he left the pitch. But why he was booed by some sections of the crowd I don’t know!

And as the fans and many tourists around me started to disperse in their droves, with them went our Champions League hopes for another season, and who knows how many more. It sadly wasn’t to be, knocked out again by PSG, but it has to be said that we were beaten by the better team over the two legs, our defence undone by fast and flowing one touch football, not all the time, but when it mattered.

But while devastated by our defeat in Europe, we won’t have much time to recover as we turn our attention to the FA Cup with our quarter final trip to Everton on Saturday. Let’s go for it Chelsea!

Chelsea In Munich – Some Memories