With the Disco Car firing on all cylinders we headed off to East Anglia for a cold Tuesday night fixture at Norwich.

A few changes in the regular starting lineup, Courtois still in goal, backed up by Azpilicueta, Cahill, captain Ivanovic, and Kenedy, with Fabregas and Matic in the defensive midfield positions. Forwards were Oscar, Hazard, Traore and Costa. Bench warmers in the shape of Begovic, Baba Rahman, Mikel, Loftus-Cheek, Willian, Remy and a surprise place for Pato. I wonder if he’s even heard of Norwich let alone been to the land of mustard and turkeys!

Before proceedings kicked off there was a superb tribute to Peter Osgood in the away stand, an homage of banners to the great man on the occasion of the 10th anniversary of his untimely death. With many fans getting involved with the display, it was huge thanks to the organisers Callum and Rory, to name a few.

Back to proceedings on the pitch and before we’d even had time to settle down we were one up. A pass from Hazard to Kenedy as they streaked forward and with the young Brazilian cutting in towards the goal and with a low shot from just outside the box into the far corner, defenders unable to stop the man and keeper Ruddy unable to stop the shot, and unable to dazzle in his pink kit. What a start! And we nearly doubled that lead within a few minutes when Traore only just failed to connect with Hazard’s short cross in front of goal.

But we didn’t have it all our own way, the Canaries clearly caught on the back foot were fired up to make amends, but we had everything they threw at us safely covered.

The game continued to be played very openly, our boys happy to let the home team pop the ball around but not having enough of it to create a real threat, and shots towards goal easily dealt with. But when we were in possession we passed it around well, slowing the game down, just biding our time to find the right ball forward. Where we had few but the more promising chances, the home team had a lot of possession in our half. Patient play by us, already with the one goal cushion.

Into the last 15 minutes of the half and the Hazard – Traore partnership nearly doubled our lead again, this time Hazard sending a long pass forward from deep inside our half, spotting Traore on the move with no one ahead of him, only for his touch to elude him on his run toward goal, allowing the keeper to collect the ball safely. What a shame.

Straight up the other end and in a moment of controversy Gary Cahill, under pressure from Jerome in the corner, passed the ball across to Courtois who proceeded to pick the ball up. Unsurprisingly, the home fans were outraged because it looked like a back pass. But the ref was having none of it, seemingly happy that the nick off the Norwich player was enough to allow play to continue.

I didn’t think those quaint home fans would stop booing, but it was the most noise they had made all game and did bring them to life. And as our boys continued to play through the din, Hazard was blatantly tripped, a yellow card produced, to more abuse for the ref from the home crowd. And the resulting free kick nearly found the back of the net as well, the pressure was building up nicely. 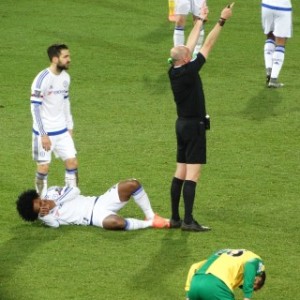 Into stoppage time at the end of the half and finally a bit of hush from the home crowd. But a throw in from Fabregas, the ball eventually falling to Traore who lofted a short ball over to the waiting Costa, and while the defenders hands all shot up for offside, the lineman’s flag stayed down, and our masked marauder chipped the ball over the pink keeper. Two up now, goals at either end of the first period, and as the half time whistle blew, more boos from the home crowd as they could sense their season slipping away.

Second half and some early threats from Norwich as they attempted to salvage the game. And they came very close to pulling one back when an unmarked Jerome saw his shot go over from close range. He should have done better but danger signs that Norwich were fighting for their survival in the Premier League.

Fifteen minutes into the second half and a double substitution for us as Traore and Oscar were replaced by Willian and Mikel.

All very comfortable for both sides, knocking the ball around in space, looking for a positive opening. And that opening came for Norwich as we approached the last 20 minutes of the game, Redmond into the box collecting a decent pass and his first time shot straight through Courtois at quite a tight angle. It looked like it was coming.

Meanwhile Kenedy was replaced by Baba Rahman to a rejuvenated home crowd, awakened once again, urging their team on for the first time during the game.

Into the last 20 minutes and the home team had certainly picked themselves up following their goal as they tried to find an equaliser. There seemed to be a lot of space in midfield and they looked to make the more of it at times.

A lively game now, and with O’Neil, Brady and Willian in a three way collision, it was the men in yellow and green who came off worse as blood was pouring from both of them, our man getting off relatively lightly.

A scrappy last few minutes, still very open though, and either team could have scored with chances being created at both ends but, frustratingly for the away fans, the home team were allowed far too much of the ball. But our defence held out well.

Into stoppage time and Costa nearly scored again when Fabregas played a lovely square ball just ahead of him as he ran into the box, only for his shot to go wide. And Norwich had a last gasp attempt of their own when Redmond earned them a corner which needed Courtois to stop a point blank shot from Martin.

So we held our breath until the final whistle, another hard fought win on the road, and still unbeaten in the Premier League under Hiddink. On top of that we find ourselves in the top half of the table as we steadily reel in those hard earned points.

Another super away trip as the Disco Car made its way back to civilisation to the smooth sounds of Ain’t No Stoppin’ Us Now. We certainly are on the move!