It was an early start on our train journey to a city in dire need of some culture – Hull, declared UK City of Culture for 2017. We made our way along busy streets filled with discount shops and miles of fluorescent plastic barriers where work is hurriedly taking place to clean up the grimy streets in an attempt to prepare for the influx of visitors from across the country. I wish them well. Stumbling across one of many old town hostelries, and with a bite to eat and a few beverages consumed we made our way to the ground, now called the KCOM, actually one of the nicer stadiums in my opinion, purely because of the unobstructed and open views of the pitch from our corner position of the ground.

Following a fully observed and moving minute of appreciation for young Hull fan Megan who had tragically passed away, the game got underway.

It was a shaky start, David Luiz conceding and early free kick just outside the box, but thankfully the superb strike from Snodgrass was tipped over the crossbar by the athletic Courtois. We seemed to be making a habit of giving the ball away, team mates perhaps not quite used to their new roles and positions on the pitch. 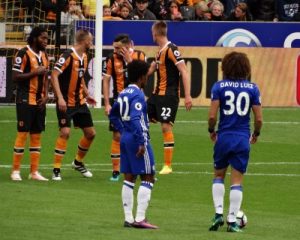 In all honesty, the game was a bit dull. We had decent amounts of possession but we were just running around with the ball with nowhere to go, slow to move forward, allowing the opposition time to organise their defensive lines. I’m OK with a patient build up, but the ball needs to be knocked into the danger area at some point, which we just didn’t do enough of. In fairness, Hull weren’t much better; their final balls were, in the main, way off target.

We were making hard work for ourselves, just not quick and creative enough to get round their black and gold lines. But when we did manage to cause a hint of trouble, it was our wing backs of Moses and Alonso who were looking the more likely to find a way through. Even our hard earned corners ended up straight into the arms of Marshall, their keeper. But we stuck at it, we tried, and at least we still had a clean sheet – progress on last time out. Zzzzzzzz…… HT 0-0.

Second half and no changes made, but it looked as if Conte might have let rip with some Italian expletives during the break because we looked a lot brighter as the second half unfolded. We were treated to a sublime turn, run and shot on goal from Eden Hazard, one that needed tipping over the bar from Marshall. Much better from the boys in blue. We were becoming increasingly tenacious and starting to cause problems for the Hull defence. The home team were getting sloppy, but our growing confidence allowed us to take advantage when Kante went on a run with the ball before passing it forward for Diego to skip past Marshall as he came out to meet him. But Diego’s shot at the abandoned goal was blocked by their desperate tracking back only for Kante to have his own shot on the rebounding ball launched towards Row Z. It would have been easier to score! 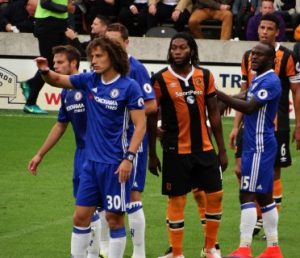 We had the bit between our teeth, encouraged by our game plan looking as if it was finally starting to work, the short passing looked a lot sharper and more accurate. And finally, on the hour, we got our reward, when some poor ball control by the Hull boys allowed us to regain possession, Diego and Willian combining their way up the pitch before Willian found that little bit of space to allow him to take the shot from just inside the box, straight into the far top corner of the goal. With keeper rooted to the spot and defenders walking away in dismay, it was all smiles for us as Willian dropped to his knees in front of the jubilant away fans in a gesture dedicating his glorious goal to his sick mother.

We had quickened the pace considerably, more likely to be moving forward than sideways, and therefore increasing our chances of splitting their defence with quick balls into the box. And it wasn’t long before we had scored again. The much maligned Matic took possession of the ball well inside of our half and, unchallenged, and with so much space ahead of him, he took a long legged stroll towards goal until he reached the edge of the box and took aim. He deserved the goal for his efforts but the ball rebounded off the defender at close range, dropping at the feet of Diego who calmly aimed at the same corner that Willian had found earlier and proceeded to double our lead.

And to the fans’ cries of the ironic Boring, Boring, Chelsea! the game resumed, safe in the knowledge that the match was won (hopefully – not wishing to tempt fate) with just over 20 minutes left to play.

We were comfortable on the ball, passing it around with confidence, until Willian was clipped in the box and went down under the challenge. No penalty according to my favourite referee (not!) Anthony Taylor. Then just a few minutes later he gave a free kick for a foul on Victor Moses on the edge of the box – I wonder if he would have given it if it was just inside? I suspect not. The resulting kick from Willian found the boot of Diego, who proceeded to wallop the ball in the direction of the big screen high above the seats!

With 10 minutes left to play our first substitution came when Hazard was replaced by Oscar. We were going through the motions, the game had slowed down to a snail’s pace, but thankfully this time because we were in control of the game and not because we wanted the pitch to swallow us up and go home, as was the case in our last game against Arsenal.

Our second substitution saw Pedro and his fast and furious little legs and the ever present cheeky smile come on for the popular Victor Moses who enjoyed his game on the wing and who departed to much appreciation from the travelling faithful.

We were running down the clock now, the game had essentially finished, the play was just going up and down the midfield third with the occasional stab at goal, Oscar’s speculative shot nearly finding the target and Pedro just wide. Our final change with just a couple of minutes left was a quick run out for young Nathan Chalobah, replacing Willian.

At last, the final whistle, one of those typical games of two halves. Great goals from Willian and the on-form Diego Costa plus the clean sheet which will give our reshaped defence plenty of confidence. Lots to be positive about.

But for now it’s another pesky international break, here’s hoping everyone involved returns in one piece!

After The Dust Has Settled …… What Next?