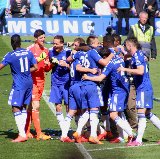 Our eagerly anticipated first crack at the Premiership title arrived. It wasn’t a classic by any stretch of the imagination but I, for one, didn’t give a flying fig! Even with the title at stake, it was never going to be an easy game, London derbies are never like that even though our visitors are a just small team in Croydon.

A surprise start for Juan Cuadrado, as first choice Ramires fell ill shortly before the game. He joined many of the usual suspects in the starting lineup with Drogba up front, Remy on the bench and Oscar rested.

A lively yet scrappy start, pretty even too, playboy Pardew’s boys looking to frustrate our party. Perhaps our boys were feeling the tension, the play a tad untidy and not much by way of shots, although a Drogba free kick halfway through the half set the hearts racing.

But just as the plucky visitors thought they had the better of us, a foray into the box by PFA Player of the Year Eden Hazard was blocked and fouled to halt his dangerous run. Penalty, and Hazard ready to convert it. It might have been nerves, because his usual assured strike eluded him, but with superb presence of mind a second bite of the cherry saw him get his head on the end of the rebounding ball to nod it into the corner of the goal. Elation, and with one hand on the title it was half time, 1-0.

With the second half came our first sub, Mikel on for Cuadrado, the Columbian lively at times but not seeing too much of the ball first half. With the fans in good voice and paying musical homage to many of our previous club legends, as well as a shout out for Roman Abramovic, the boys continued to take control of the game, a number of chances being created. Even Mikel attempted a shot on goal! As the half went on we pretty much shut up shop, save for a close effort by Puncheon. Frustrating any hope of our visitors thinking they had any chance of spoiling our day, the defensive mastery that has been so evident, especially in the second half of our season, doing its job once again. 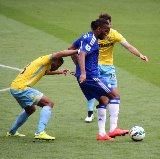 With just a few minutes left on the clock Kurt Zouma was brought on to replace Willian, again running his little Brazilian heart out. And what superb tackles the big fella put in to make his presence felt. A nervy final few minutes of the game as Palace were awarded successive corners, but we rose to the challenge to prevent those gatecrashers finding an equaliser.

And into stoppage time we went, Hazard replaced by Filipe Luis and with that big blue bus well and truly parked, the seconds ticked away.

The final whistle blown and the blue party streamers fired into the blue sky, to the noise of Queen’s anthem We Are The Champions resounding around the Bridge, the Premier League title 2014/15 was ours. Five years since our last title, and ten years ago since Jose’s first, we finally secured the trophy again, still miles ahead of the chasing pack. Celebrations continued on the pitch and in the stands, the players eventually heading off down the tunnel and the fans heading off to the many local hostelries, rocking for hours to come.