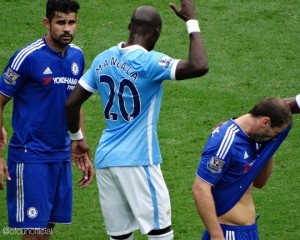 After a tumultuous week off the pitch, we went into this game hoping our boys would let our football do the talking on the pitch. The expected lineup; Begovic starting for the suspended Courtois, and Ramires replacing the injured Oscar.

After the home club finished faffing about chucking bits of paper around to celebrate the adding of a few seats to the top of an existing stand, we kicked off. A bright start from the home team, Begovic more than a match to the early threat. Despite the siege, we held firm but on the half hour, Aguero sneaked a shot through our defence and into the corner of Begovic’s goal.

We battled away but it wasn’t quite coming together, and City looked like a threat on the counter attack. And while Cahill was smacked in the face by Begovic, requiring the attention of our celebrity medical team to a recurring nosebleed, Costa took a red card warranting elbow to the head by Fernandinho so the City medical team were called on to lend a hand. No doubt the inflated invoice is in the post! Temporarily down to 9 men, we still had some defending to do but it remained 1-0 at half time.

The start of the second half saw JT replaced by Kurt Zouma, Jose looking to inject some pace at the back, and within a few minutes of the restart Ramires collected a beautifully weighted ball from Hazard only to be judged to be fractionally offside. That positive start certainly seemed to stick a rocket up our collective backsides, for a short while at least, as we searched for that equaliser, Hazard having his best chance blocked. Ramires was replaced by Cuadrado shortly after, and with 20 minutes left to play Falcao was brought on to replace Willian. Sadly, neither made much of an impact.

As we approached the 80 minute mark a City corner found the head of Kompany as he simply nodded the ball home past Begovic and as he brushed Ivanovic aside. You felt it was coming, our own spell of positive attacking opportunities not amounting to anything. 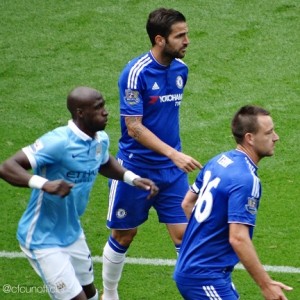 In truth we looked a bit lost, and despite the few chances we did create for ourselves, City looked the more likely. And to add insult to injury, it was Costa’s new best friend Fernandinho who added a third goal on 85 minutes, as we failed to clear the danger. FT 3-0.

Not a good day at the office at all and frankly, City deserved the 3 points. We looked lacklustre and predictable, but if anyone can sort it out Jose can, that’s why he’s just been given a new 4 year contract. But while it’s not the start to the season we hoped for, there’s a long way to go and plenty of time for others to drop points! Remember – win or lose, up the Blues!