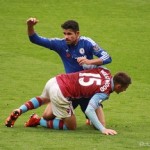 With much speculation about the starting lineup following our recent string of defeats and the injury to Branislav Ivanovic during the international break, it was interesting to see that the demands of the many armchair managers were met, with Azpilicueta moved across to right back and Baba Rahman brought in at the left, joined by JT and Zouma at centre back with Begovic in goal. Lining up ahead of Ramires and Fabregas was a welcome start for Ruben Loftus-Cheek, with Willian and Pedro our wider men, Costa returning from suspension to start up top. On the bench Blackman, Cahill, Mikel and Matic, along with Oscar, Hazard and Remy.

A quiet start to the game from our boys, and some sloppy play from both sides, giving the ball away far too readily. We seemed static at times, our movement off the ball a bit laboured as we looked a bit edgy and, as I said at the time, we almost looked like we were scared of the ball. Conversely, and while not great themselves, the Villa boys did look sharper. The crowd were strangely quiet too, it’s worrying times at the Bridge right now. 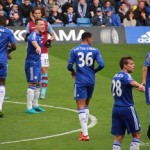 We did have our moments though, with Loftus-Cheek willing to get stuck in, but it’s fair to say that our visitors came closest to opening the scoring when Gestede popped the ball just over the bar. Meanwhile at the other end, another promising Willian free kick didn’t find its customary target in the back of the net.

But with just over half hour played a piece of good fortune, with the help of a wayward kick out by Guzan and the hapless Lescott, that boy Willian picked up the loose ball and charged goalwards, supported by the grateful Costa who received the square ball to simply slot home. That goal certainly gave us some confidence and also a much needed lift for the nervous home fans, as we looked a bit more purposeful in our play. Half time 1-0.

The second half started with Matic replacing Loftus-Cheek, which was a surprise and a shame really, his performance up to that point had been a confident one. But on the other hand understandable given our need to retain a lead we were lucky to have. 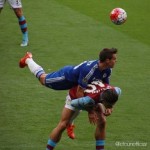 And just as the fans were settling in for a second half siege, Ramires dishing out and on the receiving end of some pub team tackling, the ball found Costa in the box via a perfectly weighted dinked pass from Fabregas, but his shot on goal at close range deflected off Hutton, over the head of the helpless Guzan and dropping into the goal. It’s fair to say that where Villa were poor, we were lucky enough to be there to take advantage.

The home crowd also began to wake up, a resurgence of hope as we sang optimistically “we’re gonna win the league”. The Shed were in particularly good voice, getting the whole ground going, fair play to them.

As we approached the final ten minutes of the game we were sensing the possibility of a third goal as Costa and Azpilicueta were linking up down the right hand side, both Spaniards getting into tangles with their markers, positively homoerotic at times! Thankfully for him, the fiery Costa kept his cool under provocation. 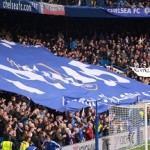 With just under 10 minutes left to play, Pedro was replaced by Hazard and as we moved into stoppage time Remy came on for the tireless Willian, rightly given a standing ovation for his incredible work rate. Full time 2-0, courtesy of two gifted goals with bows on.

Some individual performances of note, Willian and Costa of course, linking up well in front of goal, and for me Ramires was his industrious and haphazard self. But overall not the best of performances, still looking a tad lethargic, but we ground out the result despite all that, an encouragement in itself. But, more importantly, its 3 points and hopefully the springboard we need to push on as we shoot up to 11th place in the Premier League table.

So it was off for a celebratory Prosecco with friends at a local hostelry, before joining up with the usual post match supping suspects, the the mood positively jovial. Happy days are here again?