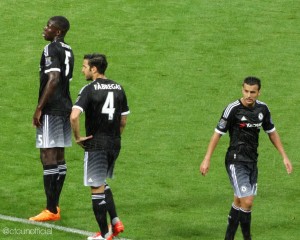 With much anticipation following the week’s completed signings of Kenedy, Baba Rahman and Pedro Rodriguez, the Blues were back on the road with a lunchtime visit to the Midlands and West Bromwich, a popular away day amongst the traveling contingent. Good to see JT paired up with Kurt Zouma at the centre of our defence. And also pleased to see Pedro given his debut, Traore and Loftus-Cheek among the substitutes.

In the pouring rain and in our new black third kit, the one with the eye boggling shorts, chances fell both ways, Costa looking lively up front with Zouma and Courtois holding strong at the back. On 13 minutes a needless foul by Matic inside the box led to a West Brom penalty, which was taken by James Morrison but was athletically stopped by our big Belgian, his body going one way as his long legs staying put, blocking the shot down the middle.

Just 5 minutes later a beautifully worked passing foray up the park involving Pedro, found the new boy with the final ball which he deftly rolled into the corner of the net, with the aid of a slight deflection on the way. A superb debut goal, greeted by the sounds of our fans singing ‘Oh Pedro Rodriguez’.

On the half hour we were two up, a swift counter attack which had Costa running the length of the pitch to slide himself and the ball across the wet turf and into the goal from Pedro’s assist, a great Spanish double act. And to the sounds of ‘Are you watching Manchester’ and the comical ‘We are staying up’ we were certainly enjoying some resurgence of energy from our boys this week.

But within 5 minutes the home team had pulled one back with a good strike from Morrison which flew through our defence and straight into the back of the net. Certainly not deflated we continued to push on, the spritely Willian missing a couple of decent chances before a perfectly weighted high ball sent over by Fabregas found Costa who was being manhandled and hauled over in the box before Azpilicueta nipped in and slot the loose ball home. A Spanish hat trick and 3-1 up at half time. 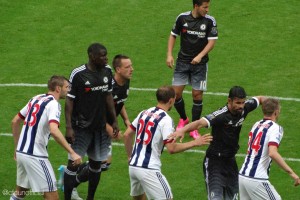 A slip sliding start to the second half, the game momentarily halted by handbags between Costa and the snivelling Yacob following our free kick. The Baggies sent down a long ball which found Rondon and JT chasing it down and coming together on the edge of the box, our captain apparently pulling him over. Red card from referee Clattenburg, JT being the last man. A tad harsh if you ask me, Rondon was clearly leaning into JT and they both fell over! Thankfully the resulting free kick came to nothing. Once again finding ourselves down to 10 men this season, Willian being sacrificed to be replaced by Gary Cahill, borrowing Fabregas’s magic mask to protect his fragile nose, always prone to bleeding at high altitude as we were at the highest league ground in England!

With just over half an hour left to play West Brom had pulled a goal back, Morrison’s looping header dropping over Courtois and into the corner of the net. 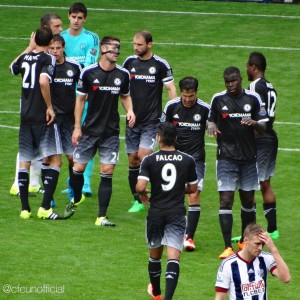 So, a nervous last half an hour, Pulis bringing on their newly acquired goal machine Rickie Lambert as they sniffed an equaliser. But we weren’t going to give up and in a great end to end game chances were going begging for both teams.

With 10 minutes left to play Falcao was brought on for Costa and a few minutes later Mikel was on for man of the moment Pedro. A nail biting final few minutes, plenty of chances for both sides to have a final say in the outcome. But thankfully we held firm and chalked up our first win of the season and a welcome 3 points.