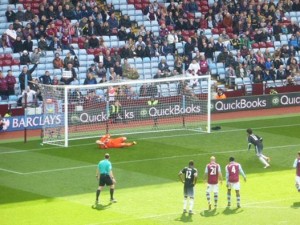 It wasn’t difficult to call this game. I’ve not seen such a shambles of a team in years, this Villa side has me scratching around for teams that have been dire in the past, but I just can’t find one that put in such a lack lustre effort. Players publicly saying they are off and others showing they want out, not at all surprised at the locals giving them the bird. (rats and sinking ship come to mind).

Out here we follow the games live on CTH, and it give a fair better coverage than I’ve ever had with the BBC or ITV, we have all the games live with 7 channels showing all the unfolding events, we still get the same match commentators, but the after match summary is certainly an improvement.

Andy Townsend gets plenty of air time and one can say he’s been quick enough to stick the boot in with us over the years, we know where his heart is and after the game you could almost see him welling up in anger and frustration, he gave Villa not just both barrels but a whole battery of abuse. This time he was quite right in his lambasting of Villa’s players. “A few should be shown the door on Sunday”…. actually I agree 100%… professional footballers!….. Both words are inappropriate for most of that Villa team.

We think we’ve had problems, well we have, we’ve got some surgery of our own to do this summer, however part of me thinks of what if? 15 games unbeaten ( to many draws) but what does it say about the league this year that we can still be in touching distance of a Europa league spot. 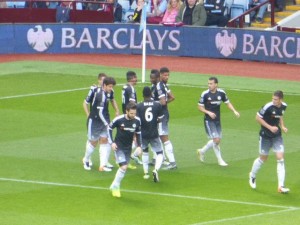 We turned up and that was reassuring for a quite changed side, Gus is doing his bit and whilst he might not be the manager next season he should be at least General Manager or Director of Football, he’s got shallow players working for the cause again. He’s giving hope to the next generation as well as every chance to some fringe players to stake their claim.

Maybe next season we can stake a claim to win back a Champions League place, our Premier league is great entertainment, however our clubs are not competing well in the CL. Times have moved on and all our so called big hitters have underperformed, one has been doing it for 13 years, flat track bullies get found out all the time in Europe, and then there is the case of new money boosting other European sides.

Newcastle are looking down the barrel of the gun too, another club which is being run into the ground. It’s still fresh in the mind of last season with them having a team in revolt and it shows that unless you let go of the problems, they will continue to fester and drag you down, a lesson to Roman to keep his eye on the main event. We are pushing for a major ground development (we did in 1972) but the then board took their eye off the team and we did not recover for many years, getting the right qualified people on and off the field is essential.

Congratulations to Pato, he got his goal, a refreshing change to see a proper penalty taken. Hard to know the implications of the game, we mixed it about, and some players did themselves no harm, you can only beat what’s in front of you, not saying that a U13 Girl Guides team would not also have put 4 past an abject Villa.

In The Clear Light Of Day ……