Always a treat to go on the road with Chelsea fans, although I had to skip on any pre and post match jollies, as I’d travelled directly from the venue of a wedding the day before and felt a bit delicate! But still great to see some of the usual suspects including the delightful ‘three amigos’, Walter, Smithy and Big Chris, standing just behind me as we approached kick off.

Starting in goal Thibaut Courtois, with the ever present back four of Branislav Ivanovic, Gary Cahill, John Terry and Cesar Azpilicueta. With N’Golo Kante just in front of the back four it was Pedro in place of Willian (reported to have a calf injury) alongside Matic, Oscar, and Eden Hazard with Diego Costa upfront. On the subs bench were Asmir Begovic, Ola Aina, Nathaniel Chalobah, Cesc Fabregas, Ruben Loftus-Cheek, Victor Moses and Michy Batshuayi.

A steady start to the game, plenty of possession and knocking the ball around the park, but not much in the way of gilt edged chances. We didn’t have it all our own way and we needed to be on our guard to the home team’s threat on the counter attack. It was untidy at times and a right old scrap in midfield as Kante and Co got stuck in.

But as away fans we kept ourselves entertained and were in fine voice as usual, it must be something about a few pre-match beverages that loosen up the vocal chords!

The first real chance on goal fell to Watford when Amrabat (isn’t that a species of Pokémon?) hustled his way up field from the half way line and with his cross from the edge of the box he almost found Ighalo only for the ball to be cleverly intercepted by Gary Cahill. Straight up the other end and a free kick taken by Eden Hazard came to nothing as the game was becoming an end to end affair. Frustratingly, we weren’t able to replicate the quick forward movement on show against West Ham last week. We were knocking on the door but the delicate touches were eluding us, Matic in particular, although not exclusively, seeming to struggle. And you know the Chelsea fans are getting frustrated when the desperate Come On Chelsea rings out.

With half time fast approaching there was a bit of contention when Costa went for a loose ball spilled by Gomes after Matic had played the ball in to our striker. But in the following mini melee, was the ball back passed to the keeper by the defender? It was well disguised!

Yet another foul on Eden Hazard on the edge of the box as we approached stoppage time, but his low shot free kick went straight through to the keeper and the ball was safely collected. HT 0-0.

Second half and no changes to report, and picking up where we left off on the pitch, lively enough but not much by way of goalmouth action and anything that did get through was wide of the mark, or snuffed out by a resolute Watford defence.

But the Chelsea faithful were keeping themselves entertained, a new song was taking shape to the tune of Chaka Khan’s Ain’t Nobody. It took me a while to work out whether the words were paying homage to N’Golo Kante or Antonio Conte. But apparently the latter. I think! Anyway, it wasn’t universally accepted if social media is anything to go by, but it was well sung at the time. At least someone made the effort; we do need some new songs even if the tunes are recycled!

But no sooner had everyone got the hang of the lyrics, Watford had pinched the lead on 55 minutes with a goal from Capoue, who was left totally unmarked when a cross came into the box, allowing him to simply loft the ball over Courtois and into the back of his net. That wasn’t in the script, but it did bring the comatose Watford fans to life. We forgot that you were ‘ere!

Thankfully, unlike most of last season, our heads didn’t go down and we started throwing some balls forward. But something had to change, we were lacking that killer ball and we were still in danger of conceding a second. 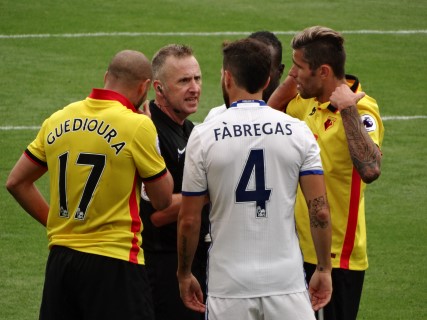 We were trying to make an impact on goal, but Diego Costa falling into the box looking for a penalty wasn’t ever going to get one over on veteran referee Jon Moss, and our man was lucky to have that effort waved away, but only by virtue of having been booked a few minutes earlier. Not even the bluest biased Chelsea fan could have thought that was a penalty.

With the boos for Costa ringing out from the depleted home crowd, we continued to push on and the Watford defence was starting to waver, resorting to bundling Hazard off the ball just outside the box. Alas, Oscar’s free kick was eventually hoofed away.

Time for the first change, Pedro replaced by Victor Moses with 20 minutes left to play, and good to see him getting a chance, he certainly looked up for it when he came on. A few minutes later a second substitution when Oscar was replaced by Michy Batshuayi. There seemed to be a sense of urgency from our boys now, our 100% record in danger of coming to a premature end!

Our third and final substitution came in the shape of Cesc Fabregas replacing Nemanja Matic who, in truth, wasn’t quite at the races, but I was disappointed at the way our fans cheered as he left the pitch. At the same time it was the first appearance this season for the man with the magic hat. We had around 15 minutes to claw back this game.

Finally, with just ten minutes left, our late pressing and change of personnel paid off when we scored; a long range shot from Hazard, the ball spilled by keeper Gomes straight to the feet of the fast approaching Batshuayi to simply blast the ball into the back of the net for his first goal of the season. Elation in the away end, and a renewed sense of purpose from our boys as they were clearly pushing on for a winner. Good to see when they might have been satisfied with a point last season.

It was all getting a bit feisty on the pitch; we were all pushing up and throwing everything at their goal, Watford having to soak up the sustained pressure.

And with less than five minutes to play came the winner by virtue of the most sublime through pass you will see. Cesc the Magician once again linking up with Diego Costa, one look up deep in their half and Costa was already on his way goalwards flanked by two Watford defenders. The pinpoint long range pass dissected the defenders and dropped at the feet of the sprinting Spaniard, who coolly took the ball into the box, and calmly placed the ball past Gomes and straight into the back of the net.

It was pandemonium in the away end, bodies flying down the gangways, including Big Chris who was last seen diving into the melee, to emerge a few minutes later with a boyish grin on his face. You can’t beat a late goal to make over exuberant kids out of grown men – it’s all good! Pandemonium on the bench too, Don Conte with his now familiar touch line celebrations.

Back to the game and to a resounding chorus of Fabregas is Magic we saw the game out, and could have even picked up a third goal.

Better late than never, but its two wins out of two and a perfect continuation of the Conte era.

Champions Of Europe – One Supporters Journey