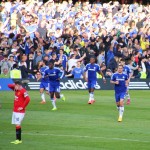 Billed as a clash of the Titans, our boys in Blue showed what true Champions are made of.

With Remy and Costa still sidelined, King Didier was called upon once again as a lone striker, but good to see Dom Solanke on the bench to deputise if needed. Kurt Zouma and Oscar also started ahead of Ramires and Willian.

A tentative first few minutes and an early highlight came when the traveling supporters (if you can call the short hop from the Home Counties as traveling) were given a fleeting taste of glory when Rooney’s shot wide was inexplicably deemed a goal by them and the jubilant De Gea. It took a while for the sad truth to sink in, as the game continued apace. 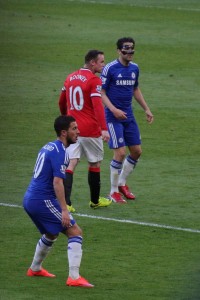 But while Ashley Young and fat boy Luke Shaw exploited the left hand side and looked a threat, the visitors weren’t able to make their possession count. As we approached half time De Gea managed to nudge the ball with his arm just outside of the box, and seemingly just out of sight of the officials too. However, 2 minutes later a beautiful back heel from Oscar found the fast approaching Eden Hazard who deftly slotted the ball through the keeper. HT 1-0.

No changes at the start of the 2nd half, our boys doing enough to contain any threat the Reds might have had. Ten minutes after the restart and a great chance went begging as Drogba’s shot was deflected over De Gea and Hazard didn’t quite manage to get the ball back from the tight angle. 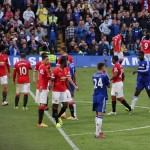 The visitors continued to have the majority of the possession but JT and the defence weren’t really troubled, Rooney especially looking a bit sad and lonely isolated in that defensive midfield position. On 67 minutes Oscar was replaced by Ramires and we continued to limit Man Utd’s chances.

Time seemed to go backwards as we approached the last 20 minutes and we were digging in for a momentous win. Into stoppage time and two changes for us, Fabregas replaced by, who else, Mikel, and Man of the Match Hazard replaced by Willian. 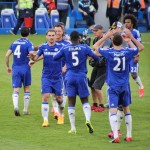 With the seconds ticking away and all eyes on the ref, Herrera resorted to cheating by diving in the box under Gary Cahill’s challenge. Luckily the ref actually saw that one!

Finally, full time and with that hard fought win the obligatory rendition of One Step Beyond. 10 points clear at the top of the Premier League and practically job done in our push for the title. Special mention to Kurt Zouma, who stood up to hair bear Fellaini, and while he didn’t have it all his own way, he did manage to keep him relatively quiet while stuffed inside his pocket. Also good to hear polite applause for former Blue Juan Mata on his return to the Bridge.

A perfect day and the celebrations continued in many a local hostelry. Roll on next weekend and our trip to the wilds of North London and the Emirates, another step closer to the prize. We shall not be moved….