After much faffing about with pre season warm-up/friendly/meaningless games it was back to business with the serious stuff, the opening weekend of the Premier League campaign.

And after much speculation about whether Diego Costa would start with his dodgy hamstring, his name was there on the team sheet along with regular starters that included both Oscar and Willian. On the bench new boys Begovich and Falcao, along with the newish Victor Moses. 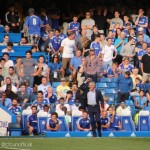 A flying start, both teams looking to take the initiative, but our Welsh visitors certainly weren’t there as spectators and some early chances fell to them, Gomis, Montero, and Ayew looking particularly troublesome. And while Oscar was receiving some unwanted attention by the Swansea hatchet boys, there was also a strong penalty shout when Costa was clipped in the box. Both teams were having their moments in an entertaining end to end game.

The deadlock was broken on 23 minutes when a free kick taken by Oscar on the edge of the box skipped past everyone and into the back of the net. Curiously, no celebration from the Brazilian. But within a few minutes Swansea had equalised, when the tricky Montero managed to get a cross past Ivanovic, and after our defence threw themselves around to block a couple of shots, it was third time lucky as Ayew managed to get through the melee. 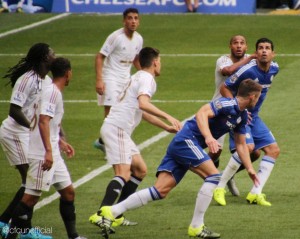 While the Choir of a thousand or so Voices were still getting choked up on Land of My Fathers, or whatever it is they sing when they go abroad, Willian had confused everyone when his intended probing cross found the heel of Fernandez as the ball looped over the keeper dropping into the far corner, much to the amusement of the home fans, and the hushed silence of our ovine friendly away fans. HT 2-1.

Another flying start to the second half, our visitors like Welsh terriers not giving this one up as they came close to an equaliser with a shot off the post. Just over 10 minutes in, the pesky Gomis found himself in an onside position and racing off towards the byeline, chased by Azpi and Cahill. And in the talking point of the game, Courtois came out and tackled the charging Gomis near the edge of the penalty box. Red card for Courtois, and an unhappy Oscar sacrificed to make way for Asmir Begovich, whose first job on the pitch was to concede the resulting penalty. Someone will need to explain to me why that was a red card, surely the approaching Cahill and Azpi meant Courtois was not the last man and therefore wasn’t denying Gomis a clear goal scoring opportunity, especially as he was not running directly towards goal.

Alas, with Chelsea down to 10 men, Swansea seized the initiative but Begovich was comfortable with anything sent his way. As the game wore on, we upped the tempo and pressure and the game could have gone either way. With 15 minutes to play Fabregas was replaced by Zouma and shortly after Willian made way for Falcao, Jose sensing that a winner was there to be nicked. But even with the late attacking flurry, including a stopped shot from Hazard, we were unable make it count. FT 2-2.

Probably not the best of days for our defence, and maybe Swansea should be afforded some of the credit for that, but I’ve no doubt we will bounce back against our title rivals when we make the trip to a Manchester industrial estate somewhere, as the Etihad awaits next weekend.